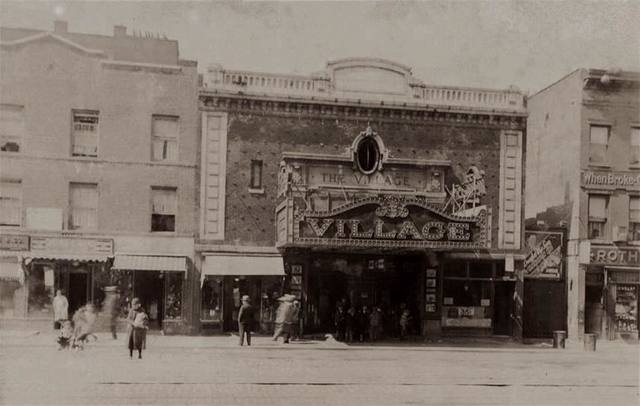 The Village Theater was located on 8th Avenue and W. 15th Street and opened in around 1917. It was still listed as the Village Theatre in 1927. According to a story in the New York Times, the Greenwich Theater was operating in 1927.

But if the site for this theater is occupied by the Port Authority building built in 1932, then either the FYB entries from at least that year up until 1942 must be in error or they are referring to a different Village Theater – unless the building once contained a new theater or what was once the original Greenwich. Or am I missing something?

According to the January, 1918, issue of the trade journal Architecture and Building, the Village Theatre was designed by the firm of Eisendrath & Horwitz.

The Village theatre on Eighth Avenue I referred to on February 2 must have been this one.

I noticed in the movie Daisy Kenyon, when Henry Fonda is sitting in the restaurant (approx 30 min into the movie) across the street is the Greenwich with Cary Grant and Laraine Day in Mr. Lucky on the marquis. I use vintage movies to find buildings and this movie references several that did exist. Hope it helps.

Thanks very much! I will add it on my list.

OK, the only Greenwich Theater I remember is the one on Greenwich closer to 7th Ave. Across the Street from it was the former Loew’s Sheridan which faced 7th Ave. The Greenwich closed in the late 1990’s, it was featured in an episode of ‘Sex & The City’ as Carrie and her friends leave the theater (which was showing Godzilla 1998), the camera pans upward past the lit ‘Greenwich’ sign, up to the moon in the sky. The theater was already closed when this was shot. Shortly after the theater was destroyed (not demolished) to make way for the Equinox Gym.

classictheaters: The Greenwich Theatre you’re thinking of is the one listed as the Art Greenwich Twin.

The Art Greenwich was totally demolished for the glass tower Equinox Gym.