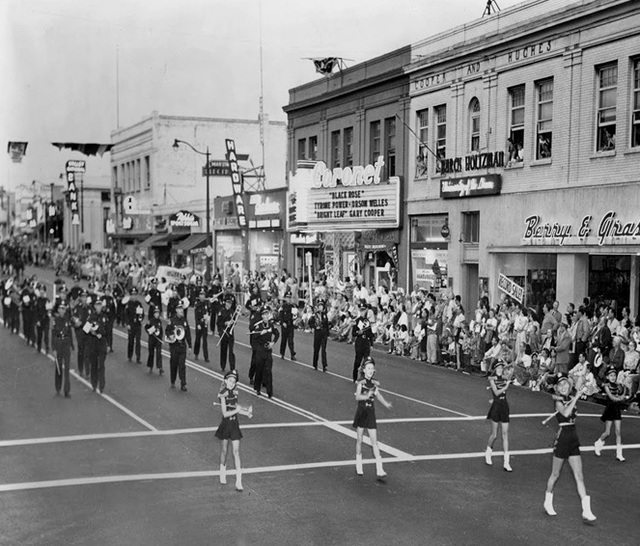 The Alhambra Theatre opened in 1917, the second of three movie theatres in the city to be given that name. It had several names over the years, becoming the Coronet Theatre on May 25, 1947. In 1964 it was renamed Capri Theatre. It was closed on February 8, 1971 with Kirk Douglas in “There Was a Crooked Man” & William Holden in “The Wild Bunch”. The following morning the building was badly damaged in the Sylmar earthquake and it was demolished in late-February 1971.

This early theater was located in the 100 block of West Main Street, at the southeast corner of Second Street. It may have closed for a while during the depression years, but by the 1940’s was open and operating as the Coronet Theatre. In 1964, it was renamed the Capri. Both as the Coronet and the Capri, it was operated by the Edwards Theatre Circuit. For a brief time in the late 1950’s and early 1960’s, it featured foreign films and a few arty independent films, but the venture was not successful, and the house was returned to standard Hollywood fare.

When it was renamed the Coronet, the small marquee was replaced by a broader, angled marquee with neon lights. The facade of the building remained otherwise largely unchanged throughout the theater’s existence, except for the removal of the decorative cornice and parapet wall in the late 1950’s, the result of a municipal ordinance requiring that all such unanchored cornices and parapets throughout the City of Alhambra either be reinforced or removed, to reduce risk to passersby in the event of an earthquake.

The Main Street and Second Street facades of the building, and their simple classical detailing, were of white glazed brick, but the other walls, and the auditorium, were built of unreinforced red brick. The classical elements may also have been featured on the theater’s interior at one time, but when I first saw the inside, about 1952, there was no evidence of them. The tiny lobby was simple, featuring a floor to ceiling drape on the wall between the aisle doors, and there was extensive use of mirrors to visually expand the small space. The concession stand was tucked into a round alcove to one side of the lobby, and the restrooms were on the other side. Access to the two aisles was through pairs of padded leather doors, with simple brass handles.

The small auditorium was lighted by side wall sconces, but I have no memory of chandeliers of any sort. The most notable feature of the otherwise simple auditorium was the elaborate drapery covering most of the end wall. A plush, gold, scalloped curtain (which could be raised and lowered), augmented with tasseled side curtains, framed the screen, and a sheer curtain opened and closed horizontally. The whole affair was lighted by spotlights and indirect lighting. It was the most elaborate screen curtaining of any theater in the area. In later years, the scalloped curtain was left open all the time, probably due to the expense of keeping i in operating condition, and only the sheer curtain was opened and closed.

The theater had a loge section of about six rows of big leather seats, and then a few hundred standard plush theater seats. There was no stage house, as the theater had been built especially for movies. Despite its small size (the smallest of Alhambra’s four theaters), it was a pleasant house in which to see a movie, the lobby and auditorium being cozy but well proportioned, and generally well maintained.

The last program at the Capri was a double bill of “There Was a Crooked Man” and “The Wild Bunch” on the night of February 8th, 1971. The following morning, the building was badly damaged by the Sylmar earthquake, and was razed a few weeks later. My last visit to the theater had been a short time earlier, to see “Woodstock” and “I love You Alice B. Toklas.” The carpets, seats and drapes had grown a bit threadbare, the young manager did double duty as operator of the concession stand, and the audience was sparse, but the place still had the charm I remembered from earlier years. I’m glad I got to see it one last time before the end.

Incidentally, in 1964, I lived for a time in an upstairs flat almost directly across the street from the theater, and my address was 131 West Main. That suggests that the theater’s address was probably 136 West Main, but I couldn’t swear to it.

The former Coronet Theatre was located at 130 West Main.

The Los Angeles Times mentions this theatre by the name Granada in an article published on July 16, 1941, so the name was changed to the Coronet some time after that.

A wider version of the picture at the top of this page is here.

Two articles on the Temple Theatre in Alhambra (L.A. Times of 12/25/1921 and Southwest Builder & Contractor of 6/3/1921) mention that Mr. O.H.Scheusener would be the operator of the theatre. The SB&C article further mentions that Scheusener was already the operator of another picture house in Alhambra. As the other two theatres in Alhambra were built later than this (the Alhambra in 1923 and the Garfield in 1925), unless there was yet another theatre in the city at that time, the theatre Mr. Scheusener operated must have been the Granada.

That the Granada already existed in 1921 is shown by this 1920 photograph from the Los Angeles Public Library. Third Street is in the foreground, and the Granada is the white two story building on the far right corner of Second Street, one block east.

There is an article in the magazine Builder & Contractor, issue of December 25, 1916, which announces the plans for construction of a theatre in Alhambra, for J.D. Morgan, designed by architect Harley S. Bradley. Assuming that this theatre was actually built, then it was most likely the Granada. This is all a bit speculative so far, but there seems to be a good chance that the Granada opened in 1917 and was designed by Harley S. Bradley.

In keeping with Cinema Treasures' standard policy, this page should be renamed to the last name under which the theatre operated, which was Capri Cinema.

Bruce Risher, author of a book on the history of the City of Alhambra, has given me some additional information about this theatre. It was the second movie theatre in Alhambra and it opened as the Alhambra Theatre (the second of three houses in the city to use that name) and was later renamed the Plaza Theatre (probably in 1924, when the third Alhambra Theatre opened), and then the Granada Theatre, the Coronet Theatre, and finally the Capri Cinema, about 1963 or 1964.

I’ve tracked down the location of the first Alhambra Theatre and will add it to the database. I now know that the Granada/Capri was the theatre mentioned in the 1916 Builder & Contractor issue cited in my previous comment. It opened in 1917, and was designed by architect Harley S. Bradley.