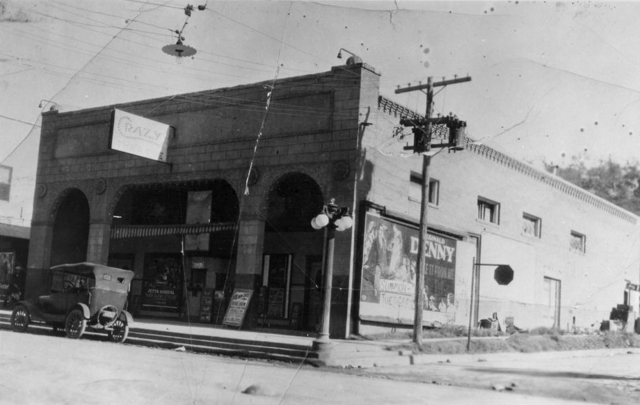 A spring near Mineral Wells, called the Crazy Woman Well, produced mineral water containing salts with natural laxative properties. In the 1920s and ‘30s the salts were sold as a cure-all called “Crazy Water Crystals,” and apparently the “Crazy” theme was very big in the town—thus the name of the theater.

What a Crazy name for a movie house.

Bennetts Office Supply located 404 North Oak (Hwy 281) Mineral Wells, TX…across the street from the Crazy Water Hotel is the place where the Crazy Theater was located. I have a photo but do not know how to publish. The photo is not mine and do not know the author. As to everything being called Crazy in Mineral Wells..Judge J A Lynch came here with his family (founder of Mineral Wells) and dug a water well…tasted funny..so a Mr. Wiggins dug another well and was known as the Crazy Woman Well because a woman suffering a nervous breakdown drank from the well and was cured after several weeks..hence woman was dropped from the name and became known as Crazy Well. People flocked from everywhere to drink the waters for their aliments.
Mineral Wells was quite famous for many years..famous movie stars (Clark Gable, Will Rogers, James Cagney, Judy Garland and many more) came for the famous mineral baths & spas. Bath house were numerous and sprang up everywhere…conventions came here and Mineral Wells became a resort town. So much history here..

One house NOT still standing, was a beehive shaped old Hotel. Built in the 1880’s, the surviving daughters of the hotels owner had in torn down in the 1950’s.
Old timers told me it was still in beautiful, pristine condition. A vacant lot now stands where it once was. It’s across from the current Crazy Water Store at 177 NW 16th. I’ll try to attach a photo or 2

The Crazy Theatre was one of six movie houses listed for Mineral Wells in the 1914-1915 American Motion Picture Directory. The Portal to Texas History says that this photo predates 1914, as the street had not yet been paved when it was taken.

On September 1, 1927, the Crazy Theatre ran an ad in the Jakesboro Gazette announcing the presentation of “The Big Parade” at the theater, with two shows a day from September 9 through September 12. “Now in its second year on Broadway in New York at $2.00,” the ad said, noting that all seats would be 50 cents for the matinees at the Crazy, with prices of 75 cents on the main floor and 50 cents in the balcony for evening performances. Tickets were on sale at the Grand Theatre’s box office, so the two houses must have been under the same management.

The Grand was most likely built by the owner of the Crazy Theatre, as an April 1, 1920 item in Texas Trade Review and Industrial Record said that architect A. B. Withers was preparing plans for the Crazy Theatre, but there doesn’t appear to have been any change to the Crazy itself in 1920. The plans were most likely for the house that became the Grand, which was designed by Withers and was open by 1921.