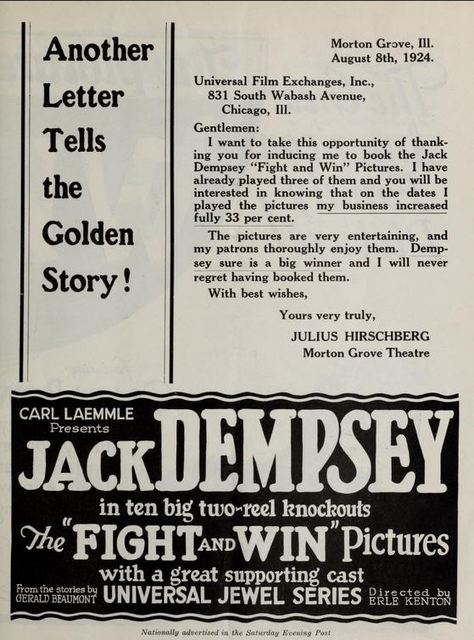 This small, early movie house is shown in movie listings in the Daily Herald to be operating through at least the 1920’s. This Morton Grove Theatre shouldn’t be confused with the later theater of the same name from the 1960’s on Dempster Avenue.

I took a look at the 1924 Sanborn maps and saw only two possible candidates. There was a Hall on the third floor of the Post Office building which stood at the NW corner of Lincoln and Ferris, near the railroad tracks. There is also a nice brick garage on the north side of Lincoln between Ferris and Callie which could possibly have been one, although I would sooner guess it was always a garage. Also there were a number of roadhouses which could possibly have done that, but it seems unlikely. Morton Grove was tiny then.

Morton Grove is peppered with vintage buildings. Especially in the area North of Main St. where it becomes Lincoln Ave. and continues on Northwest.
The Bringer Inn is over 100 years old & Pequods Pizza appears to be some type of depression era structure at least.
There are also some vintage storefronts and a Moose Lodge etc. around town. But condos are/were springing up rather rapidly in the last few years.

From trade publications 1914 to 1930 are the following: Moving Picture World magazine of September 26, 1914 “S. J. Deinlein has opened a moving picture show in Morton Grove.” July 29, 1916 issue of Motography lists “Fred Koecher, Morton Gem Theater, Morton Grove, Ill.” as attending a Chicago exhibitors convention. By 1924 the Grove was operated by Julius and Elmer Hirschberg. Universal Weekly carried a note from Julius in a ad in the August 23, 1924 issue. See photo in section. Film Daily lists a change in ownership, no names given, in the February 18, 1927 issue. Film Daily of March 24, 1927 “Joe Brandt has reopened the Morton Grove Theater in Morton Grove, which has been dark for some time past.” Film Daily, February 5, 1928 “The Morton Grove sold to V.A. Nolan & Earl Niermer by Joe Brandt.” Exhibitors Herald-World, January 19, 1929 “The Morton Grove Theater has been renamed the Cozy and reopened by Mrs. Alma Guthrie.” Find no mention of an address.

When I owned my collectables shop, I procured about 20-25 wooden folding chairs that originally been in use at the Morton Grove Theatre. They were stensilled as such on the back as I recall. I sold them all to a Civil War reenactor.

According to a bike tour map by the Morton Grove Historical Museum the theatre was on Capulina between Ferris and Callie, a former garage/warehouse. The building Broan mentions above.