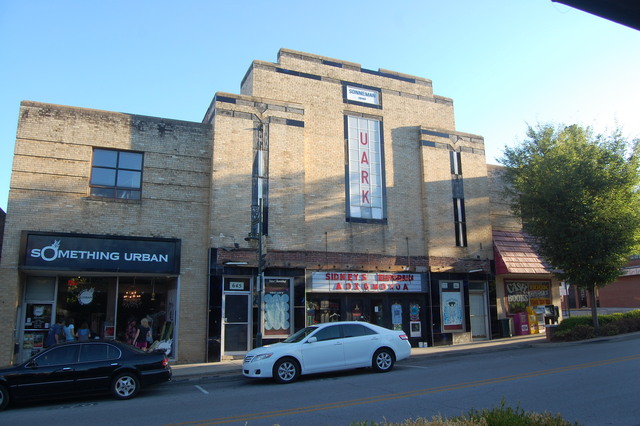 Opened January 16, 1941. It was twinned in 1972. In 1987 the U Ark Theater, named for the University of Arkansas, was a white brick building with a prominent white and red marquee and "U Ark" was spelled out on its front. The marquee sheltered a black marble fronted entrance with two movie poster frames on each side.

A 1987 view of the U ARK Theater building in Fayetteville.

Looks like it is being used for retail:
http://tinyurl.com/yg4n9n2

grew up in this town but was to young to see any movies here.

according to an old fayetteville punk historian friend Billy Callen, some of the first punk shows were held at the UARK , not sure the years, but fayetteville legends the Malls (featuring my old FHS highschool english teacher Tom Cochran) were one of the bands listed as playing, and according to urban legend such shows ceased when an anonymous band member threw a bottle at the owner’s head!

The UARK was dark as a movie theatre well before the 1983 date mentioned above. In late 1980 or early 1981, the punk shows mentioned by blackholecinema began, using the name “Col. Smuckers” for the venue, and it hadn’t been used for movies for some time at that point. The music performances actually took place not in the movie theatre proper but in a large area behind it at the back of the building — you walked from the lobby down the hallways on either side of the main auditorium area, past the doors into that halfway down, and all the way to the back, behind the screen area of the main theater, where there was a platform with tables/chairs at the same level as the entrance, and ramps or stairs down from that to an open area used as a dance floor/mosh pit, with the stage area at the very back. On at least one occasion a patron rode a motorcycle down the hallway, down the ramp and onto the dance floor where he revved the engine for a while before leaving. The bands featured included both local bands and groups from Tulsa and other areas, such as The Malls, The Distraktions, The Dots, The Mutant Fish, and the Zebramakers (just to name the ones I remember).

FWIW, the address listed on the show posters that some of my old cronies from those days have scanned and posted on Facebook is 649 W. Dickson.

The lobby area was a fairly classic 1940s movie theater — modest sized open area just inside the doors, backed by a large sweeping staircase down to a lower lobby area with couches and with the men’s and women’s “lounges” on either side. I don’t think I ever did more than sneak a peek into the actual movie auditorium area.

Also FWIW, I never saw any indication that the UARK had ever operated as a twin with two screens, unless the back area where Col. Smuckers operated had been the second screening room. If so, by the time I saw it, it looked a lot more like an unfinished storage/working area than someplace people would willingly watch movies.

Meant to add that I saw shows at the UARK from late spring to late summer of 1981, and left Fayetteville in August 1981. There were still Col. Smuckers shows happening when I left, but they ended very soon after. I believe I have somewhere a photo of the facade of the UARK in the early 1980s that I used as reference for a drawing of it. If I can find that I’ll scan and post.

This article posted on the Fayetteville Flyer web site on May 17, 2011, refers to the U Ark Theatre’s marquee as “…a 71-year old Dickson Street landmark….” If the theater was the same age, it would have opened around 1940.

Fayetteville is home to the University of Arkansas. When Paul Young Jr. of Fayetteville architected the unnamed, forthcoming $100,000 showplace in 1940, William F. Sonneman decided on the name, the UARK Theatre. It launched at 649 W. Dickson on January 16, 1941 with the film Hunted Honeymoon. (Within the UARK Building were two retailers: Harkey’s fashion store at 647 West Dickson operating almost 12 years and Scharmm’s The Campus Grill with its soda fountain at 651 West Dickson opertaing for almost 28 years. And apartments were above these three spots.)

The 640-seat UARK had a 15x20’ Da-Lite screen with RCA’s “Magic Voice of the Screen” multi-cellular sound system. Its Barton pipe organ was played by Gladys Cosnell Sonneman. The theater was owned by Bill Sonneman and was his seventh in his Arkanas theatre circuit along with Fayetteville’s Ozark, Royal and Palace. The Malco Theatre Circuit purchased the four Fayetteville theaters from Sonneman in june of 1948.

As the era of the single-screen theater began to wane, Malco started to look for locations for twin screen theaters offering free parking and more options at the end of the 1960s. This would change the face of Fayetteville moviegoing forever. But Malco gave the UARK one more chance. Following the November 25, 1970 showing of “Fantasia,” Malco briefly closed the UARK to twin the theater. It relaunched as the UARK Twin Cinema 1&2 on January 22, 1971 with 2001: A Space Odyssey” and “Gone with the Wind.” But the conversion wasn’t lucrative enough for Malco which would shutter the operation just after three years following the May 5, 1974 showings of “The King & I” and “O’ Lucky Man.”

There was life after Malco as Jeffrey Seidensticker and Richard Sherin subleased the theater from Malco and reopened the UARK. After more than a year of being dark, the pair repositioned the UARK as a repertory house and some art / porno chic on the front house launching with “Citizen Kane” on December 7, 1975 and live events on the back house. The theater housed a disco (42d Street) and a new wave club (Colonel Smuckers) before ending as the UARK Arts Center in 1981. The building continued to host retailers over the next three decades looking on the exterior pretty much the same although without its marquee.

I lived in Fayetteville from 1978-early 1982. I remember the Uark being a twin theater in 1980. I went to see Looking for Mr. Goodbar which played in the front theater and Fritz the Cat played in the other screen. I became a Dickson st regular as I moved closer. There I met Larry Brandt who lived above the theater. When you walk up to the theater on the left there was a door to get into the apartments ( which used to be offices) and at the landing you turn left to the apts or keep going up to the loft. I ended up living in the loft for a few months. When the theater aspect started to wain Larry asked ( if memory serves me right ) Mr. Pierce who was the owner or caretaker of the building about doing music. It started out being I think a New Wave dance club but soon featured live music under the name: Col. Smuckers. The Corvettes a local band ? played the first show. then Larry started his band : The Mutant Fish. After that show, bands started to come from Tulsa like Los Reactors and Oil Capital Kings and N.O.T.A to name a few. It attracted a following and a few locals like Private 9 and Slob god and John Russell Love and myself helped to keep things going. I left in early 1982 to move back to California and by the time I left the club was all but over with. larry lived there for a few more years I believe and have no idea what happened to him. It was a magical time for Dickson st and a music scene that I later found out kept going and moved the shows to The Icehouse. That is most of what i remember from that time of the Uark.