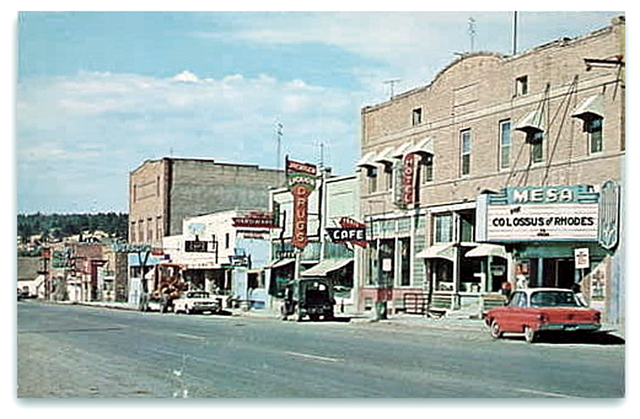 The Star Theatre was opened in 1912. In 1919 it was renamed Liberty Theatre. It was renamed Mesa Theater around 1950 and retained this name until 1974, when it reverted back to the Liberty Theater name. In July of 1988 the Liberty Theatre was open and showing "Willow". It was housed in one end of a large white brick building and had a plain white marquee with no neon. The marquee sheltered an entrance and had "Liberty" spelled out on each side in block letters.

A 1988 view of the Liberty Theater in Pagosa Springs.

This theater is still open and is showing “The Ugly Truth” and “G-Force” this weekend.

I’ve found the Liberty mentioned in Boxoffice as early as the June 10, 1939, issue, when it was being operated by C.F. Runbaugh (some later issues of Boxoffice spell his name Rumbaugh.) The Liberty changed hands a couple of times in the later 1940s, and then July 17, 1948 issues says that it had been sold to Albert Petry (later issues of Boxoffice often spell his name Petri, and at least once it is Petrie.) The last time I find the Liberty mentioned is in 1950, though Mr. and Mrs. Albert Petri (or Petry) are named often after that year as operators of a theater at Pagosa Springs.

Then starting in 1960, the Petris are suddenly cited as the operators of a theater in Pagosa Springs called the Mesa. Then the Mesa is the only theater in Pagosa Springs mentioned, which happens frequently until 1972, (with a single exception in 1970 which names the Petrys as owners of the Pagosa Theatre in Pagosa Springs- probably an error) and after that Pagosa Springs drops from the pages of Boxoffice until 1993, when an unnamed 180-seat theater there is offered for sale in a classified ad. That’s the most recent mention of the town I can find.

Even though the theater’s official web site says that the Liberty has been operating under the same name since 1919, I’m wondering if the Mesa was an aka for the Liberty and the original name was later restored? Operators of small town theaters are often theater buffs who move there from other places and they sometimes get the history muddled. Pagosa Springs is, and has been, a very small and rather isolated town, and it seems unlikely that it would have supported two movie houses into the 1970s.

The rewritten intro for this theater has the theater’s names out of order. The house opened as the Liberty (in 1919, according to the official web site,) was called the Mesa from sometime during the 1950s through at least the early 1970s, and the name Liberty was later restored.

This weblog post has a small photo of the theater from the late 1950s, and the name Mesa is on the marquee. The Boxoffice items I cited in my previous comment indicate that the theater was still called the Liberty at least as late as 1950. The last mention of the Mesa in Boxoffice was from 1972, but as no names are given for a theater in Pagosa Springs after that, I don’t know when the name Liberty was restored.

I don’t know why the theater’s official web site says that the house has been called the Liberty since opening in 1919, when that photo of the building with the name Mesa on the marquee exists.

From 1961 a photo postcard view of the Liberty when it was still the Mesa Theater in Pagosa Springs.

New pictures of the Liberty posted in the Photos section.

Boxoffice, May 27, 1974: “Joe Lister has taken over the operation of the Mesa Theatre, Pagosa Spring. The house formerly has been operated by Albert Petry”

The town of Pagosa Springs, embedded in the San Juan National Forest, is the only incorporated municipality in Archuleta County, and is thus the country seat. It has a population of about 2200 people in a county with fewer than 15,000 people. It was named after a sulfurous hot spring, thought to be the world’s deepest, called by the Ute people “Pah gosah,” which means something like “stinky water.”

Harold Sanborn, owner and operator of the Sanborn Souvenir Company of Denver, took this photograph of Pagosa Springs’ business district on one of his countless photographing trips through Colorado, probably in or around 1945. The dates on the license plates are too blurry to make out with certainty –– the one on the right closest to his camera looks like it is dated 194? –– and the film playing at the theater, “Eadie Was a Lady,” starring Ann Miller, was released in January 1945.

Most of the buildings visible in this photo of Pagosa Street are still intact and recognizable today. The street runs southwest at this point. Sanborn was looking west-southwest. From the right, the first building after the liquor store was built in 1912 as the Archuleta Mercantile. The easternmost suite, the portion nearest the viewer, was the Star Theater, while the bulk of the building was given over to the mercantile. After the second of two fires, however, the building was restored and remodeled in 1919, with the Star Theater returning as the Liberty Theater, and the mercantile being replaced by the Metropolitan Hotel. When Sanborn took this photo, both of those establishments were still in business. The hotel no longer exists today, but the Liberty continued under that name until at least 1950. The owner changed its name to the Mesa Theater sometime after 1950, and kept it under that name until he sold it in 1974, sometime after which the old Liberty name was restored. (The theater’s website and the plaque on the building both say the name Liberty Theater has been used continuously since 1919, but “Box Office” magazine, which kept close track of these things, records the sales and name changes. Photos exist of the theater with the Mesa Theater marquee.)

At the time of the photo, between the theater and the hotel sat the Rickelton Drug Store, which also housed the U.S. Post Office. The next building, with the stuccoed, tiered façade, was, and remains still, Jackisch Pharmacy, which opened in 1929. The next couple of building have been replaced since with newer buildings that actually look more in keeping with the others on the street. The three-story brick building, then Hersch’s Piggly Wiggly, a franchised supermarket, still exists. The next four buildings seem to also still exist, but remodeled, and newer buildings have filled the empty lots between them. Finally, crossing Pagosa Street where it turns sharply west, the three buildings, centered by Dee’s Grocery market, also still exist, but have been refaced to look more like a single building. It is the Archuleta County Courthouse."