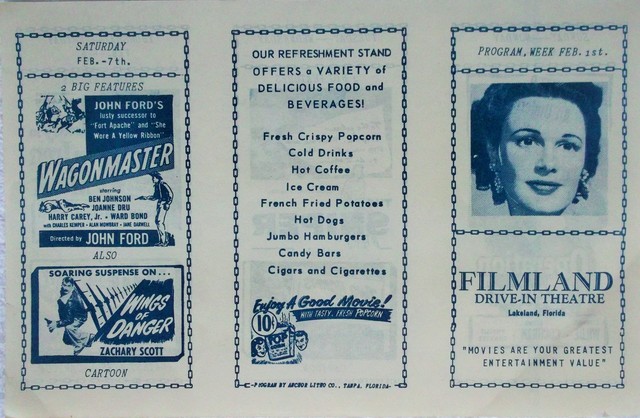 The Filmland Drive-In opened on January 8, 1953 screening the 1952 comedy “Dreamboat” starring Clifton Webb, Ginger Rogers and Anne Francis. In addition they showed Bugs Bunny cartoons for enjoyment by both adults and children. It was opened by W.H. (Bill) Clem and Joe Falletta (dba Filmland Drive-In Inc.). They were both World War II veterans and decided their growing town needed another outdoor theatre. They decided to call it Filmland. The buyer and booking agency was Exhibitors Service, Jacksonville, FL. It opened with RCA’s latest film projectors along with RCA sound system and in-a-car speakers. The new airer was advertised to park 600-cars with room to add another 150 spaces in the future. Mrs T.M. Campbell was the concession stand operator.

The Johns Hopkins All Children’s Outpatients Care, Lakeland now stands on the site.

Here’s a photo of the Filmland Drive-In:
IMG]http://i188.photobucket.com/albums/z105/moviemike/filmlanddrive-in-1.jpg[/img]

Running X product in the early seventies, “BORA,BORA” and “SADISMO”.