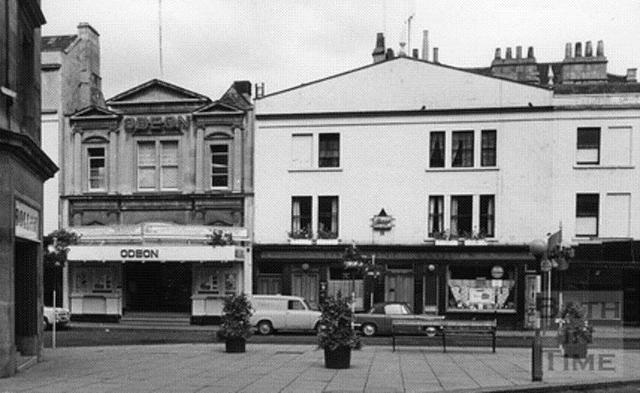 In 1935 it was taken over by County Cinemas chain who were then taken over by the Oscar Deutsch, Odeon Theatres Ltd. chain from 31st July 1935 and was re-named Odeon from 2nd December 1935.

The Odeon always had a rather ‘old fashioned’ look to it, with a Bath stone façade in a Classical style and an auditorium which had a deeply curved barrel roof. It was closed on 13th December 1969 and was purchased by property developers. The new Southgate shopping centre was built and the site of the Odeon is occupied by a store for Boots Ltd.

The Odeon was famous for it not having any form of doors to its front entrance. At night the departing staff simply wound down a portcullis type gate across the entrance, leaving the area behind open to the elements and visible to all.Thus in winter times the foyer was extremely cold to say the least.

I was a projectionist at the Odeon from 1959-1968 it was a cinema that time forgot with very old projection equipment and only in the latter years did they install Kalee 21s to replace the Kalee 12s the western sound system was run on batteries that had to be charged every other day this Theatre played a big part in the Bath festival every year, showing special films for this ocasion one year was a world premier
In 1962 and again in 1968 that part of Bath was flooded when the river Avon burst it’s banks the Oden was flooded out and was closed for many week while new seats were put in and everything dried out I have many memories of this cinema and being in my 70s now not many people left that do remember

It appears I was taken to one of the very last showings. A double bill of Winnie The Pooh and 20,000 Leagues Under The Sea, on Friday 28th November 1969.