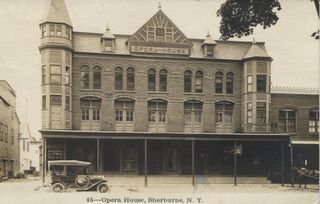 A 1925 article in The Otsego Farmer indicates that William Smalley had just added this theatre to his chain. It was not clear whether the theatre was already in existence or not.

The Binghamton Press of 12-30-52 stated (in an article about bingo in theatres in Chenango County) that the Sherburne Theatre closed the summer of 1951. It was still open in May of that year, when there was a fire in the projection booth that forced an evacuation of the building. It seems likely the fire may have precipitated the closure of the theatre, though the Press article blamed the advent of television.

Per various news articles and the Sherburne Historical Society facebook page, we can glean more information about this theater.

The Sherburne Theater started life as the Sherburne Opera House. Ground was broken in September 1891 on the site of an even earlier theatre which was destroyed by fire, but about which little is known. The opera house opened on February 20, 1892. The auditorium was on the second floor of the building.

A 1930 newspaper article indicates that this was the same theatre Smalley had added to his chain in 1925. It apparently was a five year lease since it was due to expire Nov. 1 and the paper further claimed that Smalley “had left the theatre idle for quite a portion of the latter part of the term of the lease,” indicating the theatre was open intermittently, if at all, from 1928-1930. The problem may have been Smalley not wanting to make the jump to sound on a leased, small town operation as the same article said that upon expiration of the lease the Sherburne Opera House Company planned to renovate the theatre for talkies and reopen it as a movie theatre, thus beginning the modern era of the theatre.

With the help of old postcards we can trangulate both what this large structure looked like, and where it was. It stood just north of the building on North Main Street that now houses Service Pharmacy and a pizzeria. A parking lot now stands on the site. Address should be 16-18 North Main.