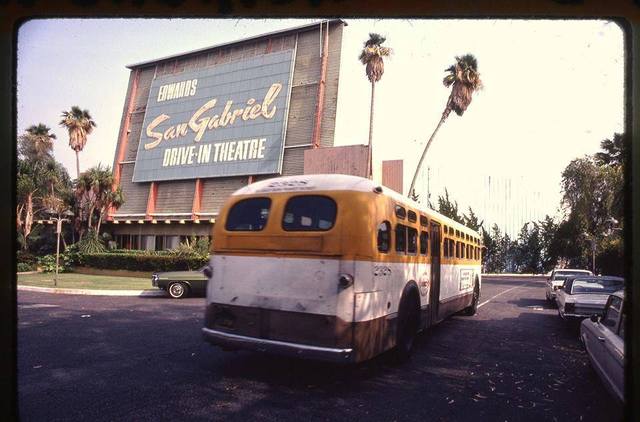 Opened July 14, 1955 with Richard Widmark in “The Cobweb” & Ava Gardner in “Ride Vaquero”. The San Gabriel Drive-In was on the south side of Valley Boulevard, and just west of DelMar Avenue in the city of San Gabriel. It was closed June 27, 1984. It has been replaced by a large shopping complex.

‘Just Old Bob’ writes; ‘The last movie I saw there was “Close Encounters Of The Third Kind”, and it operated for some years after that. A very nice drive-in.’

Along with the old Starlight Drive-In in El Monte, the San Gabriel was truly our local neighbourhood Drive In. I recall the first film I saw there was “Goldfinger” in 1964 at the age of 5. Taken with my older brother Michael and his mates, I felt like one of the guys. My bro and his mates proceeded to get totally pissed on beer and what not and I have a vivid memory of him having to pull his big Ford over to the side of the road after the films let out so his mate could puke. Good times! Of course I did the same thing 10 years later with my friends too. Saw lots of good stuff there including “The Omen” and a bunch of other stuff I can’t rememeber. But they had a pretty good snack bar and I recall the pizza was not half bad! Hard to belive now that there were ever things like drive-Ins.

As can be seen from the full version of the photograph above, this was called Edwards San Gabriel Drive-In Theatre. It was one of several San Gabriel Valley drive-ins in which Pacific Theatres and the Edwards circuit were partners.

I remember watching this place being built, but I can’t remember exactly what year that was. I think it was no later than 1956, and certainly was not very much earlier.

Items in various issue of Boxoffice Magazine from 1955 indicate that the Edwards San Gabriel Drive-In opened early that year. The architect of the 1100 car theater was J. Arthur Drielsma. The project included a 2,400 square foot building at the base of the screen tower, on the street side, which was designed as an office for the Edwards Theatre Circuit, and the company’s headquarters remained there from 1955 until it was moved to Orange County in the 1970s.

The February 4, 1956, issue of Boxoffice featured a photo of the Edwards San Gabriel Drive-In, about a year after it had opened.

Thanks Ken, at least we have a aerial view of what the lot looked like, since no one else posted one. Quite a distance from the back row….

I guess I could put an iPod on my hood to relive the experience….

If Anyone Else Has Anymore Photos Of The San Gabriel Drive In Theater Please Post Them I Would Love To See The Theatre Snack Bar, Concession Stand, Projection Booth, and Playground

In the mid 60s, my mom, dad, and I, and friends of theirs & their toddler (I was about five) went to see “Dr. Zhivago” there, and they sold out! I still recall an employee out front waving his hands in the air, gesturing they couldn’t allow more cars. We then went the following week, still packed, but we got in. A few years later we returned to see “Krakatoa, East of Java” (1969).