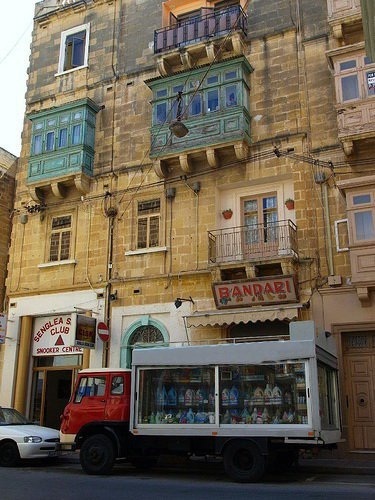 From an unassuming exterior, it is currently possible to enter an unused and almost intact former cinema of great interest in the tiny city of Senglea.

The Stoll Cinema would appear to date from the late-1920’s or early-1930’s and has an unusual tin panelled interior. The ceiling consists of panels in an deeply undulating pattern descending to the multi Moorish arched proscenium. All in in the metal panels. The lower part of the proscenium arch has been cut away.

The single balcony is currently used as a junk heap, but retains all the steppings and seats. A false ceiling has, at one time, been erected below the balcony, but all the panels are now removed. The flat floored hall was used as a snooker hall after films ceased, but this too has finished and the auditorium is used only for storage. The foyer is a bar and social club.

Around the rear of the building the "Keep Clear - Cinema Exit" signs are still in place!

This cinema has now been demolished.

… or maybe not. There was a report of demolition, but google street view of 2016 shows both front and rear to be intact.