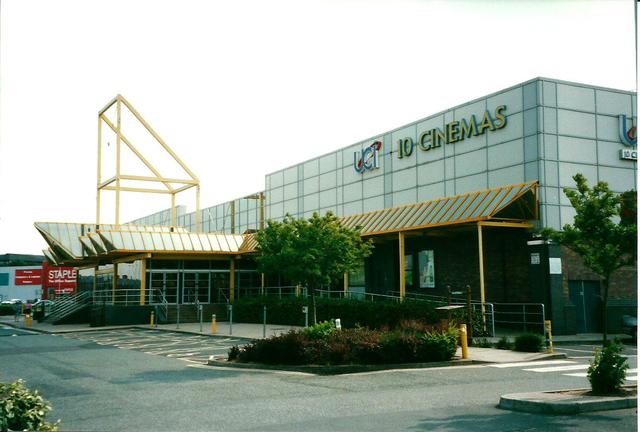 Located in the Merry Hill Shopping Centre at Brierley Hill, Dudley, this 10-screen multiplex opened as the AMC on 14th October 1988. When the cinema opened it became the Black County’s for multiplex cinema. Before the cinema officially opened to the public, an American style ‘Drive-In theatre was hosted in the car park, presenting “E.T.

It was later taken over by UCI.

It was taken over by Odeon Theatres and re-named Odeon in around 2005. Seating capacities in the screens range from 313, down to 158.

seen here in june 1992, i had just done the marquee for the opening of The Lover starring Jane March (the sinner from pinner as the press named her)
i was manager at Dudley from 1991 to 1994
View link
front view
View link
the huge iron tower on the front was meant to represent the former steelworks upon which the cinema and shopping centre were built. Internally the cinema was a carbon copy of the american AMC sites of the time, with auditoriums in dark pink and maroon.
The screens originally seated 350 x 2, 254 x 2, 224 x 4, 175 x 2.
In its glory days the cinema topped annual attendances of 1.1million customers per year, since then it has faced increased local competition from the nearby Showcase 14.

Nice exterior and lobby shot(s). Do you have any more, or is that the lot you have?