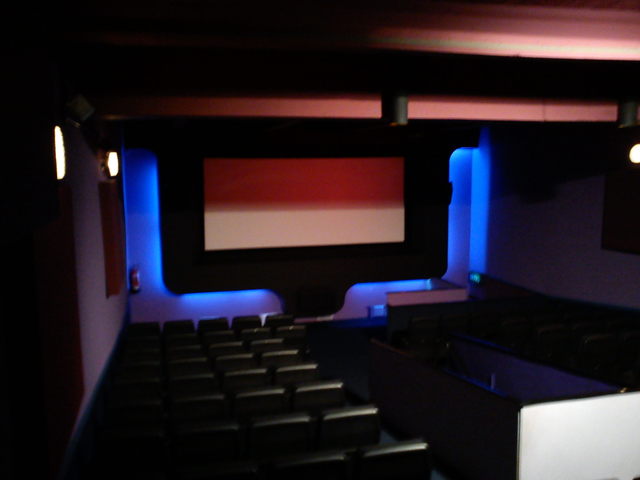 Located in the Bristol suburb of Henleaze, the current 3-screen Orpheus Cinema was built on the site of the original Orpheus Cinema that had opened in February 1938 with 1,400 seats, set in an Art Deco style building. This was closed (amid great protests from the community) on 23rd October 1971 and was demolished the following year (it has its own page on Cinema Treasures).

A Waitrose supermarket was built on the site with the Studios 5-7 Cinema located above. It opened on 10th November 1974 with "Live and Let Die", "Cabaret" and "That’ll Be the Day". The Studios 5-7 were initially operated by Star Cinemas (Star already operated Studios 1-4 in the city centre).

The Cannon Group took control in 1982 and the cinema was re-named Cannon 1-3. It remained in their control until 1994 when Cannon decided not to re-new the lease. The Cannon closed on 8th January 1995 and it was re-opened by the independent operator Picturedrome Cinemas on 13th January 1995 as the New Orpheus Cinema.

There are no screen curtains, but the screens are surrounded by illuminated frames. There is a single projection box, and Screen 1 is served via a periscope and mirrors located in the middle of the projection box ceiling.

Seating capacities in the screens are; 185, 129 and 125. The cinema was operated by the independent Reeltime Cinemas UK chain until early-2009, when it was taken over by Scott Cinemas chain.

This website has the story of the two Orpheus Cinema’s which have stood on this site, plus photographs:
View link
A November 2006 photograph of the entrance to the Orpheus Cinema:
http://flickr.com/photos/chrisbertram/310447522/

The Orpheus is now under the ownership of Scott Cinemas who own a number of cinemas in Devon such as the Central in Barnstaple and the Regent in Lyme Regis (Dorset).

The original 1938 Orpheus art-deco cinema was designed by architect Alec French. The actual opening date for the site was 16 February 1938 with the Lord Mayor performing the opening ceremony. The first film was “Lost Horizon” starring Ronald Coleman.

The current Orpheus Cinema was refurbished during an ongoing program from late 2009 to late 2010. This included the complete renewal of all front-of-house areas and toilets. Multiplex style seating was installed in screens 2 and 3, and picture sizes were enlarged as far as the frames would allow. Care was taken to ensure some of the cinemas better “period” features survived. DTS Digital sound and CSS services were installed in screen 1. The cinema features digital projection with XpanD 3D in screen 3, with a full digital conversion due to take place in Septeber 2011. Current seating capacites are 90, 105 and 150.