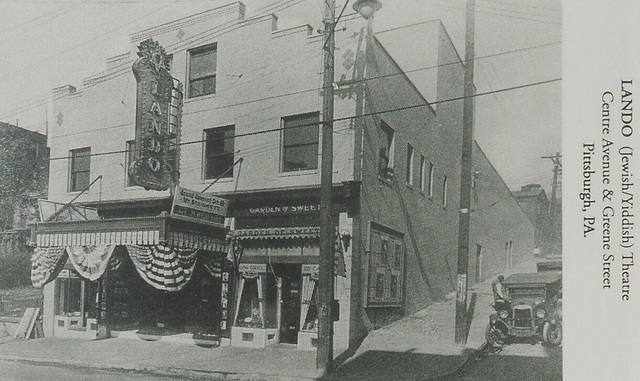 Not to be confused with the much better-known New Granada Theatre, which was about two blocks east of the original Granada Theatre, on the same side of Centre Avenue in Pittsburgh’s Hill District. The Lando Theatre was opened by William N. Lando on December 13, 1929 with John Breeden in “Fox Movietone Follies of 1929”. It was an African-American theatre. On September 11, 1931 it was renamed Grand Theatre. Following a refurbishment, it reopened as the Granada Theatre on February 5, 1934 with Robert Armstrong in “Son of Kong”.

It was converted into a church, and screened its final movie “Blow Gabriel” (a religious film?) on December 10, 1948. Soon after it converted to retail us. It was damaged by rioters in 1968 and was demolished in 1969.

Here is a March 1951 item in the Pittsburgh Post-Gazette. If the theater was at 1854 Centre, as the article states, it is long gone.
http://tinyurl.com/7zxcgb

The Lando Theatre was offered for sale or rent by the Lando Realty Company in an ad in the November 8, 1940, issue of Boxoffice Magazine. There is a photo of the theater, and the way the building was arranged on the steeply sloping site makes me suspect that this might have been a reverse theater, with the screen and stage at the front of the house instead of the back.

This place seems to have switched names frequently. The July 7, 1931, issue of Exhibitors Forum said that the Lando Theatre, Central Avenue, had been renamed the Grand. It apparently became the Granada in 1934, when it was leased by Hendel and Rosen, who opened the New Granada in 1937.

The September 18, 1937, issue of Boxoffice carries an item saying that the Lando-Grand Theater on Center Avenue, formerly the Granada, had been reopened.

Then the August 5, 1939, issue says that the Former Lando-Grand Theatre had been reopened as the Central Theatre.

In its issue of September 21, 1940, Boxoffice said that William Lando was reopening his Lando-Grand Theatre on Center Avenue after the previous operator had failed.

In any case, the last name under which I find any mention of the house is Lando-Grand (probably chosen to differentiate it from the Warner Grand/Stanley Grand operating in Pittsburgh at the same time) so that’s probably the name under which it should be listed at Cinema Treasures. That would, of course, also help differentiate it from the New Granada Theatre. The Lando appears to have been known as the Granada only from 1934 to 1937 in any case.

That picture above must be from another theatre – it looks much larger than 600 seats.

spectrumis correct. The photo depicts the Grand Theatre on Fifth Avenue, which we have listed under its later name Warner Theatre.

The November 8, 1947 ad in Boxoffice that I mistakenly dated to 1940 in my earlier comment can be seen at lower right on this page.

The grand opening for William N. Lando’s Lando Theatre was on December 13, 1929 with “The Fox Follies.” It was part of the Theatre Owners Booking Association, or T.O.B.A. Unfortunately, T.O.B.A. - the vaudeville circuit for African American performers in the 1920s - went out of business just about a year later.

On September 11, 1931, the venue was renamed the Grand Theatre with a week-long engagement by Mamie Smith as one of the first bookings there. Hendel Theatreical Enterprises took on the venue after a major refresh as the Granada Theatre on February 5, 1934 with “The Son of Kong.” Handel had operated the Roosevelt Theatre across the street as well as the Center Square Theater. In 1937, the Granada moved two blocks away creating the famous, New Granada Theatre. The old location reverted to its recent past becoming Lando’s Grand Theatre (technically not Lando-Grand but who much cares?) as a Yiddish / Jewish theater.

The venue became the Church of God in Christ in 1944 followed by the Beck Gospel Temple in 1947 where the religious film screening of “Blow Gabriel” on December 10, 1948 appears to be the final screening at this location. The venue was retrofitted for retail purposes not long after. The building became a retail location before becoming damaged in 1968 following five days of vandalism, rioting and arson that took place in response to Martin Luther King Jr.’s assassination. The building was demolished just shy of its 40th anniversary in 1969.