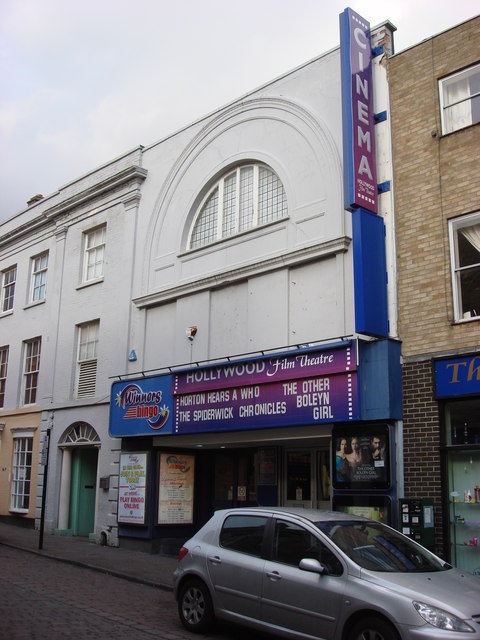 The Central Cinema opened on 4th November 1924 with Lois Wilson in "The Covered Wagon". Initially it had a seating capacity of 900 in stalls and circle. There was rear-projection and in the early years the stage was used. The auditorium was built at the rear of existing residential property and the entrance and foyer was through the ground floor of that property. It was independently operated, but came under the control of the Bostock chain before 1930.

It was damaged by a fire on 13th September 1930, and was immediately restored, re-opening on 1st November 1930 with Janet Gaynor in "Sunny Side Up". A new conventional position for the projection box was found above the foyer and the seating capacity was now 660. New owners took over in in the late-1940’s and the Central Cinema was closed on 10th October 1959 for refurbishment. The last films being Mario Lanza in "For the First Time" and George Montgomery in "Watusi".

Re-named Abbygate Cinema, it re-opened on 30th December 1959 with the UK premier of "Please Turn Over" starring Ted Ray, who made a personal appearance, together with other stars of the film; Jean Kent, Leslie Phillips and Joan Sims. The seating capacity had been slightly reduced to 564.

In around 1971, it was taken over by the Star Cinemas chain, based in Leeds. They twinned the auditorium and re-named it Studio 1 & 2, with seating provided for 196 and 117 in the two screens located in the former circle. The former stalls area was converted into a bingo club. Taken over by the Cannon Group in August 1985, the cinema was re-named Cannon, and it was re-furbished in December 1986.

The Odeon was closed in November 2005 when the new Cineworld multiplex was about to open, but it was taken over by Hollywood Cinemas and re-opened on the same day as the Cineworld, the 18th November 2005.

Now catering to a family audience and screening ‘up-market’ films, the town centre location of the Hollywood Cinema makes a good contrast to the new Cineworld.

In March 2010, it was taken over by the Picturehouse Cinemas chain, and was closed in April for refurbishment, re-opening on 30th April 2010 as an all digital cinema with 3D, and re-named Abbeygate Picturehouse.

The Picturehouse circuit was acquired by Cineworld in December 2012. With that company also operating the town’s multiplex, it was required by the Competition Commission to sell one of them. Subsequently in June 2014, Cineworld sold this cinema to a new company, Abbeygate Cinemas Ltd., for an undisclosed sum. Long-time cinema operator Tony jones was one of the partners in this new venture. Happily, long-serving manager Pat Church, who had been at the cinema for almost 50 years, was able to stay on.

Following its enforced shutdown from March 2020, during the nationwide Covid-19 pandemic, the Abbeygate re-opened its existing two screens on 10th July 2020. (its Number 4 restaurant & bar had re-opened on 4th July 2020. Earlier in 2020, that area had undergone an impressive refurbishment, which late in 2019, a new box office had been revealed).

All this was rapidly followed, on 31st July 2020, by the opening of a completely new 165-seat screen which is located in the former stalls, where Winners Bingo had ceased trading on 21st September 2014. Its lease had expired, but the closure was blamed on the smoking ban in public buildings and the rise of on-line bingo. At that time, Tony Jones had expressed interest in bringing that area of the building back to cinema life. The work eventually began in earnest in January 2018 but it was rather protracted. Additional funds, generated by the ‘2020 Building Blocks’ scheme, through which “hundreds of cinemagoers” were able to contribute money, provided to be invaluable.

The new auditorium is called The Premier Screen. According to press quotes, it has “theatrical curtains”, a vast curved screen with state-of-the-art 4K laser projector and a full 7.1 surround sound system, three drop-down chandeliers (due to be installed in time for Christmas 20202) and a selection of premium sofas for patrons to relax on".

The existing auditoriums have also been upgraded, but are still called Screen 1 (with 115-seats) & Screen 2 (68-seats).

Can any other cinema or theater boast the number of owner and name changes? Local movie-goers must be dizzy when trying to remember the present name!

Manager/Projectionist Patrick Church wrote a book with details on his days at this theatre. It is called THE SMALLEST SHOW ON EARTH.