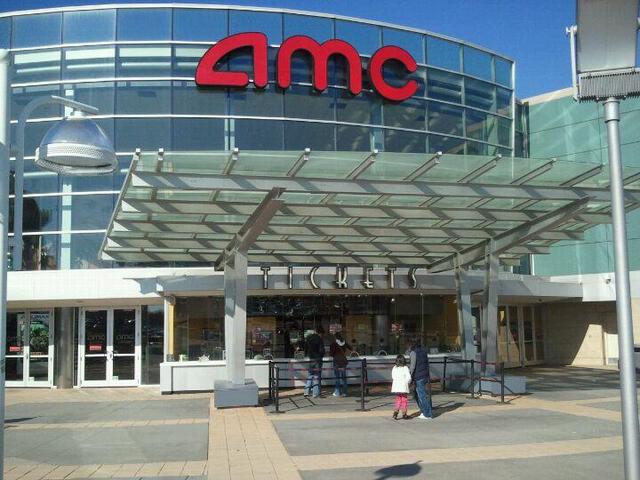 This multiplex was opened December 19, 2003 as part of The Plaza at The Mall in Columbia.

All auditoriums have stadium seating and digital sound.

I saw Oz the Great and Powerful during its run in IMAX 3D and the IMAX sound was very weak. Bass output was practically non-existent and the sound overall was not loud at all for IMAX. Projection was good, though not as bright as the projectors at Cinemark Egyptian.

Star Trek: Into Darkness in IMAX 3D was the complete opposite with brighter projection and much louder sound, though the mid and high frequency audio seemed to be louder than the bass at times.

I thought the Man of Steel (standard 2D) presentation in auditorium 7 over the weekend was better than both of those projection wise. The IMAX projectors seem to have higher contrast with more saturated color compared to the DLP projector in #7. Like the Into Darkness presentation in IMAX 3D, sound in Man of Steel was loud but emphasized the mid and high frequencies with even less low-frequency/bass output.

Like most AMC locations that were built before digital cinema became standard, this theater still uses their old, low-resolution video projectors for pre-shows (AMC locations in Owings Mills and White Marsh do the same as well). Local Cinemark and Regal megaplexes that were built with film projectors (Arundel Mills and Snowden Square, respectively) are using their digital cinema projectors for all presentations, including pre-shows.

For those who enjoy watching trailers: this specific theater frequently shows old trailers (not the most recent trailers) and sometimes does not show new teaser trailers that are included with new film releases.

A shooting near the movie theater in the mall has the mall on lockdown today.

this theater is being used as a shelter for victims of the shooting as a precaution since it’s a separate building.

After around 2 months, auditorium 14 reopened and a regular film poster had returned to the poster case. They made me excited and it never went through.

Unusual auditorium choice for the conversion since 14 is not one of the largest in the theatre. 2 and 7 are the largest auditoriums. Hopefully one of those will eventually be converted.

This opened on December 19th, 2003. I uploaded the grand opening ad in the photo section.

Dolby Cinema opened today in auditorium 3 and is showing Power Rangers, which was mastered in Dolby Vision and Dolby Atmos formats.

Dolby Vision and Atmos in Dolby Cinema look and sound great here. Patrons at other Dolby Cinema at AMC locations complain that the seat transducers are distracting, while I found them to be more subtle at this theater. It’s definitely not like D-BOX, which I found to be like a theme park ride, even with the motion setting on low.

The red aisle lights do not cast a glare on the screen. Most likely because there are no aisle lights on the front of the steps facing the screen like other Dolby Cinema at AMC locations.

Saw Wonder Woman in Dolby Cinema and the power of the seat transducers felt like they were turned down. Not nearly as powerful as they originally were, which was disappointing. In many scenes where you’d expect to feel the transducers, they weren’t even on. I only remember 3 or 4 scenes where they were actually activated. I normally expect to feel them during the Dolby Cinema at AMC trailers but there was nothing at all. The sound also seemed to be turned down a bit. Dolby Vision looked great as usual.

Guardians of the Galaxy Vol. 2 in auditorium 2 also had sound issues. The front screen speakers were too quiet, while the surrounds were louder than the front speakers. So some dialogue was not completely understandable in a film where this is an important aspect.

I watched the last Spider-Man Homecoming show in Dolby Cinema and I don’t know what’s going on here. The Dolby Cinema presentations here are inconsistent like the IMAX auditorium.

I feel like they only installed Dolby Cinema in this specific mid-sized auditorium (#3) because the entrance doesn’t cast a glare on the side of the screen when the door is opened like in the IMAX. I don’t remember if that’s the case in the largest auditoriums but Dolby Cinema would have been better in those rooms due to their much larger size. I guess they didn’t want to lose that many seats with the recliner installation. To be fair, theater 3 feels much smaller than it did with the original seats. Looks like they lost over half of the original seating capacity with the recliners.

Are the Dolby Cinema projectors working properly here? Both Spider-Man Homecoming and Black Panther did not look like they were true HDR. The colors didn’t look as bright and vivid as Power Rangers and Wonder Woman. The contrast looked better than standard projection, notably in dark scenes but the colors aren’t as saturated as they were when the Dolby Cinema first opened. Projection was slightly soft as well, with the edges of objects looking a bit blurry. The Dolby Cinema demo trailer directly before the films didn’t have true black either, unlike when it first opened.

Apparently, they also started using the old house lights during the preshow and trailers. Originally, only a few dimmed red ceiling lights were used. I guess people complained that it was too dark. But now there is glare on the screen during the trailers and the Dolby Vision projectors aren’t bright enough to offset the glare.

When I saw Black Panther, I didn’t feel the seat transducers — it was like Wonder Woman again, which I didn’t mind. But they also turned the volume down to the point where it just sounded like a standard auditorium with better sound quality. Looks like the Dolby Cinema went downhill like the IMAX. If you go to an earlier show with cheaper pricing, it may be worth it for some but not for me.