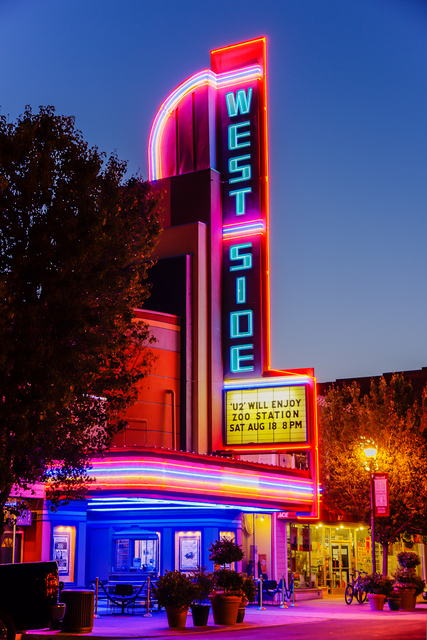 Opened as the Newman Theatre in 1940 with seating for 685, mainstream movies were shown for 40 years before devoting its last days to Spanish-language films.

The theatre was converted to a roller skating rink in 1984 but soon fell into disrepair.

In 1996, the city of Newman took over the property and a non-profit organization – the West Side Theatre Foundation – was formed. Using volunteers and donations, the road to refurbishment began.

Today the exterior is exactly like it was during its golden years, down to the tile and glass ticket booth. The conventional row seating in the auditorium has been removed in favor of cabaret seating, accommodating 200.

My most vivid memory of the West Side Theater is seeing “Jaws” there in 1976 with my wife when she was eight and a half months pregnant with our son. We would later tease about the scary scenes and music of that film being the cause of her going into labor. Based on that teasing, a teenage cousin of our newborn son bought him a stuffed animal shark which was immediately christened “Jaws.”

We’ve seen several live performances since the conversion to cabaret seating, and have thoroughly enjoyed them.

Box 6, folder 16 of the S. Charles Lee papers concerns a Newman Theatre in Newman, California. Could that be this house under an earlier name? (The Lee website doesn’t provide any photos or drawings of the Newman Theatre.)

A photo of the current interior can be seen here:

This web page (http://louisebrookssociety.blogspot.com/2010/04/high-class-pictures.html) contains Newman, California newspaper ads for two theaters in the town of Newman. The Star (with Gus Johnson as proprietor) was operating by the mid-1920’s, and the Newman in 1937. I am not sure of the relationship of either of these theaters to the West Side.

The information in the comment above by thomas_gladysz is the final piece I needed to clear up the mystery. The West Side Theatre did indeed open as the Newman Theatre, probably in 1936 or 1937.

Southwest Builder & Contractor of March 6, 1936, mentioned plans by architect S. Charles Lee for a theater project at Newman. Boxoffice of December 18, 1937, said that the newly formed West Side Theatre Company was taking over two houses from the Harvey Amusement Company; the land and building of the Newman Theatre at Newman, and the leasehold on the Empire Theatre at Gustine.

I’ve been unable to find an exact opening date for the Newman Theatre, or when it was renamed the West Side Theatre, but I no longer have any doubt that they were the same house.

Here is another photo:
http://tinyurl.com/y3a2kzp

Interesting how it bears such close resemblance to the Lark, Park, and Noyo theatres but with twice as tall a tower.