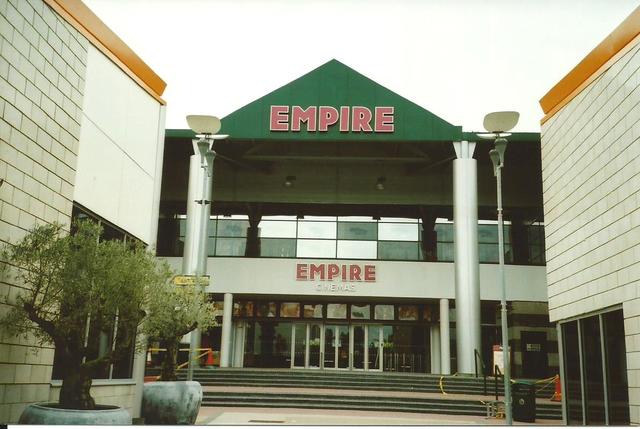 Located in the Tower Park Leisure Park, 3 miles northeast of Poole. First opened on 15th December 1989 as a 10-screen AMC theatre with 2,080 seats. It was quickly changed to UCI when CIC purchased AMC in the early-1990’s.

It was later owned and operated by Empire Cinemas.

A full refurbishment was carried out in November 2008 when six small ‘Studio’ screens were added. Stadium seating was installed in all screens and the foyer was completely re-designed.

In July 2016 it was one of five Empire Cinemas purchased by the Cineworld chain. The other four were the Empire, Leicester Square, London, Basildon, Hemel Hempstead and Bromley.

LOL this is where I started out as projectionist 20 years ago LOL.

It was great in its day but since I left and over the years this dump really started to sound like a load of RUBBISH!

The house Dolby fader on the Dolby CP65 I believe that used to be installed was often turned up beyond 7 buy the other younger projectionists and they busted in several hundreds pounds worth of surround speakers!

It was great time and leaning experience, but would I do this type of job again and at this site. Not for Â£million pounds!

I couldnâ€™t care less what upgrades theyâ€™ve made recently with this digital nonsense. first impressions is what makes it count and this cinema as failed time and time again in the past though the 1990â€™s and into the early years of the 21st century. Its not worth going to this site! Its not an Event!

If you want and EVENT! Go to the Empire Leicester Square screen1 JBL installation 56KW THX sound system its OUT OF THIS WORLD!

http://www.empirecinemas.co.uk/?page=cinemainfo&id=82&tbx_site_id=34 says it has now 16 screens.

Just the two larger screens (Nos 5 and 6) have full 2.39 Scope screens. The other 8 in the original cinema plus all 6 of the more recent ‘Studio’ cinemas just have 1.85 screens necessitating that Scope films be shown “letterboxed” centre screen and, as is normal practice nowadays, there is no top/bottom masking. This was confirmed to me in an E-Mail by Empire cinemas a while back.

An unusual feature of the cinema in its early UCI days was that many of the medium seize auditoria were L-shaped with a section taken out of the back for the projection booth which it shared with the auditorium next door.

When Empire took over and refurbished the cinema, the L-shape was removed. Whether just the upper part of the ‘L’ was taken out of use or whether the size of the projection area was reduced, I don’t know. It could be the latter as digital projection can take less space than 35mm.

The overview of this cinema (above) refers to one of the screens being IMAX. I can see no reference to IMAX on the Cineworld web-site, so that comment may not be true.

Either way cinema goers in Poole have a poor choice when wanting to watch Scope films as this cinema, in my opinion, is basically just a very large TV set.

I’m flummoxed by the CT description* as, in 2008, Empire did not operate any locations with IMAX screens, nor had they launched their own “premium large format” IMPACT screens. (I would have said “PLF brand,” but the IMPACT geometry is actually patented.)

Maeve Contractors has published a case study on their work at this venue for Empire Cinemas (refurbishment/new auditoria.) They describe the project as a “Two phase strip out and refurbishment,” and state that the contract value was £5m.

*(“A full refurbishment was carried out in November 2008 when six small ‘Studio’ screens were added, and one of the screen was converted into an IMAX screen.”—Quoted so that this post still makes sense should the description be updated.)

Thanks to CT for updating the page. :–)