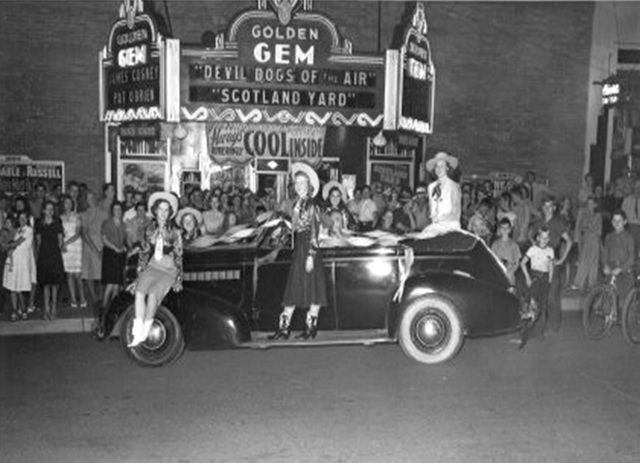 Golden, Colorado’s historic movie house was first built in 1911-12 as a dual-use facility featuring the Gem Theatre on the first floor and Golden Athletic Club on the second. The theatre opened on June 1, 1912 and had 300 seats. A Photoplayer theatre organ was installed here in 1926. The Gem Theatre, later renamed the Golden Gem Theatre, soon took over the whole building and joined the Atlas Theater Corp., a Denver-based chain, in 1935. Sister theatre’s in Atlas Theater Corp. chain included the Oriental, Gothic, Federal, Holiday and Ritz.

In 1948-49 the theatre was doubled in size and completely remodeled into a beautiful Art Moderne palace designed by Charles Dunwoody Strong and executed by Art Moore, featuring towering twin parapets of tile made by the Denver Terra Cotta Company, a "Golden" script marquee advertising its new identity as the Golden Theatre, and an interior of feather motif décor with a purple and aqua color scheme. Its new capacity was 900 seats, including the balcony.

After a brief conversion to showing pornographic films it closed in 1970, was reopened as a family film theatre in 1972, and then closed permanently in 1976. Afterward the interior was greatly remodeled to accommodate retail business, eventually completely taken over by Steve’s Corner western wear store.

Around 2001 it was completely gutted but exterior largely restored (except for the long-gone marquee) and is now home to several restaurants and offices.

Starbucks has moved in:
http://tinyurl.com/575rxb

There are some photos and ads on this page:
http://tinyurl.com/4ynz7a

ATLAS THEATRE CORPORATION should please be added as owner/operator and one time. They were a pretty big circuit here in Colo and I will start rounding up theatres as I can.

ATLAS THEATRE CORPORATION should please be added as owner/operator and one time. They were a pretty big circuit here in Colo and I will start rounding up theatres as I can.