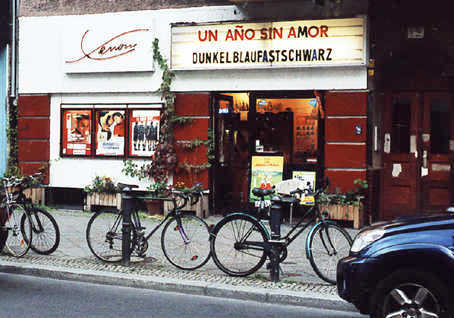 Opened as the Colonna-Lichtspiel on 1st October 1909 with a seating capacity of 183, this is one of the oldest operating cinemas in Berlin. It is located in the Schoneberg district in former West Berlin.

The cinema is in the ground floor of a five storey house. Until 1913, the screen was at the entrance end, so patrons entered from behind it, facing the projection beam. Since 1913, this was reversed to a regular configuration. The auditorium is long and narrow, with 19 rows of around 8 seats per row. On the right side the seating abutts the side-wall and entry to the rows is from the gangway on the left hand side. In 1939, the seating capacity was slightly increased to 198, and in 1952 several move seats had been added to make the seating capacity 203. The Colonna-Lichtspiel was re-named Colonna Kino from 1978.

In 1983 it was taken over by new owners and re-named the Xenon Kino. For many years now it has been the Berlin’s premier screen for gay themed independently made films from around the world. All fims are screened in their original versions/languages. Occasional hard-core gay films are screened and it has also been used as one of the cinemas to host the Berlin Pornographic Film Festival, which is held in October.

Some details (in German) and photographs of the Xenon Kino here:
http://www.kinokompendium.de/xenon.htm