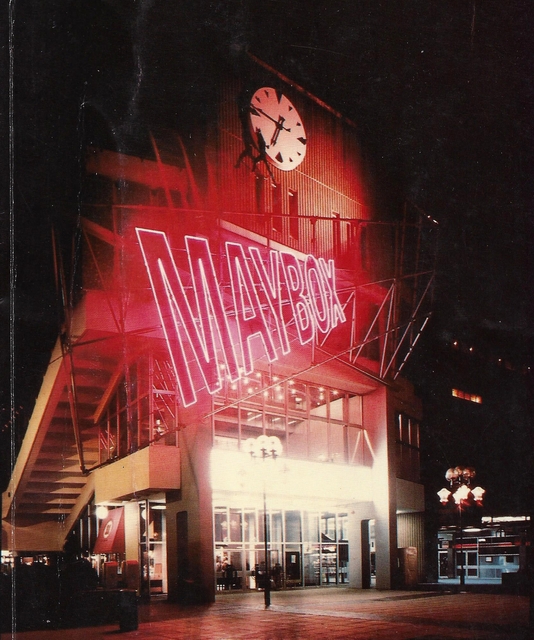 Situated in the Queensmere Shopping Center in Slough, Berkshire.

10 screens spread across 4 floors. Seating capacities in the screens range from 487, down to 96. The cinema has seen many different chains operate the site and is a good example of how the cinema industry in the UK has changed over the years. It was built for the Maybox Group opening on 3rd November 1987 as the Maybox Movie Centre, then became the Gallery when it was operated by Cineplex Odeon. Later operators were Virgin, UGC and Cineworld.

Formerly two separate buildings, Screen 4 used to be a theatre that had a removable screen. The stage area still remains behind the screen with all the fixtures and fittings still in place. Unfortunately after a very poor refurbishment by Virgin Cinemas, the screen masking cannot be moved.

In its heyday the site was one of the busiest cinemas in the UK with well over 1,000,000 admissions per year, but due to increasing competition and lack of investment these has steadily been eroded.

The Architects for the refurbishment of the building into Maybox Cinemas were Farringdon Dennys Fisher, formerly of 1 Mercer St., London. The building had been used as a community center previously. The partner in charge was Bill Fisher.

As perhaps imagined due to the huge amount of former owners, the inside styling is a mishmash of 1990s and 2000s design from its various former incarnations.

The top floor (screens 6 to 9) in particular appears to have been completely untouched since around the turn of the millennium, to the point where as of February 2015 it continues to advertise the long, long closed Virgin Megastore on the ground floor – a brand defunct since 2007!

I was a senior projectionist there in 1999-2002 when it was UGC with Ian Bolton and ron shepard who where original from the abc central in reading .screen 4 still has the changing rooms for the theatre under the stage also the projector could be seen through the glass fronted projection room

Watched a bunch of movies at this cinema during the early to mid 90’s. Think it was run by MGM in those days?

See that it has changed ownership a number of times since then but it is sad to read that there has been little to no investment over the past two decades.

A couple of things I don’t like are unreserved seating for all performances and have the aisle running right through the centre of the auditorium. What is the point of booking in advance if you still have to arrive early in order to obtain a good seating position?

Screen 10 has all ‘premium’ seating which carries no additional charge. Not sure if these are the same so-called ‘premium’ seats as found at Empire, High Wycombe or not? But I found there to be nothing particularly premium about them. They are located in the back three rows only in screens 3 & 4 (the two identical largest auditoriums). No uplift charge for these seats but previously these could only be booked online and not in person at the cinema. Not sure if that is still the case or not? When I watched The Wolf of Wall Street I opted for premium seats to see what they were like and was disappointed. They didn’t seem any more premium than the standard seats. The leg room is poor if you are a tall person. Have not chosen those seats again since.

I suspect the premium seats are left over from when this was a Virgin cinema and it offered a deluxe screen with bar, cloakroom service etc.

Photos of the Empire taken in October 2019 here:–

Placed its 1st ad as Gallery Cinemas Slough on May 3rd, 1989. The logo is the same as Cineplex Odeon.