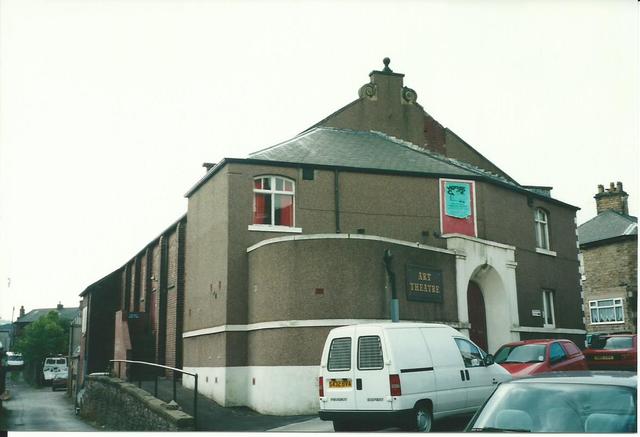 Opened on 24th June 1911, the Empire and Hippodrome Cinema had taken only 3-months to construct and was designed by John Fraser and J.B. Fraser.

It was largely rebuilt to the designs of Albert Winstanley and reopened on 29th August 1921 and it is this, largely unaltered, auditorium which can be seen today. It operated as a cine-variety theatre and was known as the Art Picture Playhouse. The projection box, possibly from the 1911 building was situated under the balcony (added 1921) and is now used as the control room for the theatre. The proscenium is 22 feet wide, the stage 22 feet deep and there are 5-dressing rooms. From at least 1937 it had been re-named Art Theatre with cinema use and occasional variety shows.

On 21st March 1959 the cinema was abruptly closed, and only survives today because the efforts of the New Mills Operatic and Dramatic Society, who at first leased the Art and later in 1966 bought the building. They had performed at the theatre since 1922.

They have steadfastly maintained and improved the building, retaining the distinctive auditorium with its barrel vaulted ceiling of pressed tin plates. In 1985 a major refurbishment was carried out to the designs of noted designer Clare Ferriby. More recently the stalls floor was replaced when dry rot was found, and the seating has all been renewed.

The Art Theatre today is a credit to the group, and is a truly delightful example of a small town picture theatre.