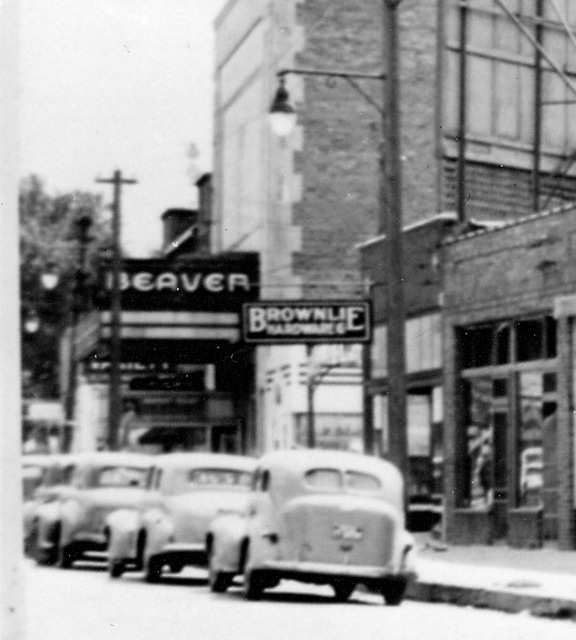 The Beaver started its career as the Gem in 1936, then took its neighborhood namesake in 1936, running as such until its closure in 1957

A history of the Acanthus Lodge of Masons has this to say about the building the Gem Theatre occupied:

“…a building was erected at 2706-2708 Beaver Avenue by Dr. L. H. Chamberlain, with Acanthus Lodge assuming a ten year lease on the entire second floor. The plans for this floor were in accordance with the requirements of the lodge. It was not until 1935 that the building was completed and the lodge was able to move. On March 4, 1935, the new hall was opened at 3:00 o’clock in the afternoon for a public reception.”

However, this item appeared in the Iowa “Changes in Ownership” column in the May 27, 1930, issue of The Film Daily: “Des Moines—Gem, sold to L. H. Chamberlain by Roy Jones.”

Chamberlain’s name appears in two items in The Film Daily in 1931, too, both saying that he was planning to build a $50,000 theater in Des Moines. I Haven’t found any later items about that project, so I don’t know if it was carried out. It’s possible that he had to put the project on hold until the economy improved, and that it was this house.

It’s also possible that the history of the Masonic Lodge, which has a 2013 copyright date, was mistaken about the building on Beaver Avenue having been entirely new in 1935, and that it was the Gem Theatre Chamberlain bought in 1930 rebuilt to accommodate the second floor lodge hall. The Acanthus Lodge moved to a new building in 1950, and the details of what happened in 1935 might have gotten muddled.

I still don’t know if the Gem Theatre that Roy Jones sold to L. H. Chamberlain in 1930 was demolished, or merely expanded to accommodate the Masonic Lodge upstairs, or if the lodge and new theater were actually on a different site than the original theater, but the Gem could have been the house that was the subject of this item from the November 28, 1925, issue of The Film Daily:

I don’t see the Gem listed in the 1927 FDY, but it’s possible that it opened under a different name.

The July 8, 1950 issue of BoxOffice noted that “Paul E. Anderson, 52, operator of the Beaver”, died after an eight-month illness. “Anderson had operated the Beaver for the last 15 years.”