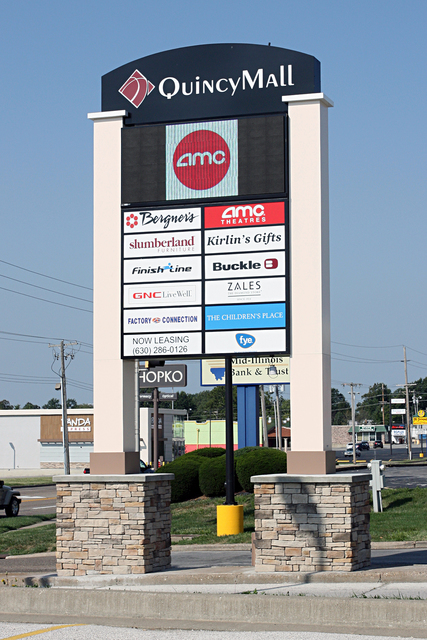 Opened as a twin by Dickinson Theatres in November 1978. In June 1979 a third screen was added. In June 1994 it was taken over by Kerasotes Theatres.

Was this originally a Dickinson Theatre? When I worked for them back in the 1970’s, Dickinson operated a twin in Quincy. Does anyone know if this would happen to be that theatre which would have been added onto at a later date?

This should be updated to AMC Theatres.

Apparently now has digital projection (including 3D) – – unlike many small Kerasotes sites they closed – it looks like they’re in this one for the long haul.

JoelWeide, I remember it back in the 70’s as a Keresotes theater, and as far as I know (which is 1974 and on) it has always had 3 screens.

The theatre’s present lease and iteration began as a two-theatre facility in November of 1978 under the Dickinson Theatre Circuit with a small rent and revenue sharing deal with mall developer Don M. Casto Organization of Columbus, Ohio. As the shopping center moved toward the terminus of its 20-year lease cycle, Casto had decided to build an entirely new mall nearby in Quincy. But plans changed and the Miracle Mile was reimagined as an enclosed mall with some tenants remaining in place and others moving or closing altogether. The renamed Quincy Mall launched on November 14, 1978 and Dickinson’s cinema was a key component of the center’s next forty years.

In June of 1979, Dickinson expanded its operation adding a third auditorium. At roughly the middle part of what appeared to be a 30-year lease in June 1994, Dickinson assigned the lease to the Kerasotes Theatres Circuit which continued the three-screen cinema’s operation and likely extending the lease by ten years as the initial lease was reaching expiry.

In June of 2010, the theatre became an AMC property when Kerasotes was bought out by the AMC Circuit operating as the AMC Quincy Mall Cinema 3. When the Carmike Circuit joined with AMC, AMC rebranded lower tier properties as AMC Classic. This operation became the AMC Classic Quincy Mall 3 in 2016 – a name it retained until closure in January of 2019 at the end of its lease with “Mary Poppins Returns,” “Spiderman: Spider-Verse” and “The Grinch” on January 7, 2019.

Hopes for a new operator appeared to be dim as the Mall went into a sudden downtrend losing all three of its original three anchors of JC Penney (closing in 2015), Bergner’s, and Sears (both closing in 2018). But operator VIP Cinemas took a chance on the venue equipping it with new seating and a lower pricing first run policy. It reopened September 14, 2019 as the 40 year old theatre continued into operation into the 2020s.