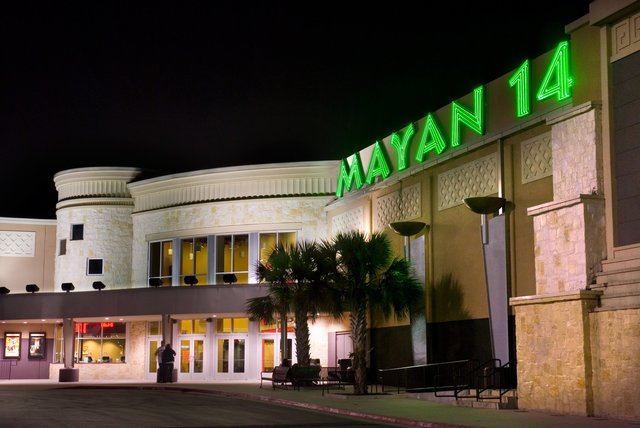 In 2003 it was rebuilt as the Mayan Palace 14, opening on October 17, 2003. It was designed of architectural firm Hodges & Associates.

The Mayan Palace 14 began as a two-screen house called the Century South Theatre, built in 1968. Later renovations converted it to a four-screen operation, but the major expansion came in 2003, when it was substantially rebuilt as the Mayan Palace. The project was designed by the Dallas architectural firm Hodges & Associates.

Browning Construction Company, contractors for the project, published an article about the Mayan in the first issue of their house organ, currently available as a pdf file from this page at their web site. The article has several photographs of the theater.

I saw on some other site that there was a shooting at this theatre two days after the CT school incident???

Two Injured in San Antonio, TX Movie Theater Shooting. The Village Voice headline is a bit misleading. The gunman was shot in the theater, where an off-duty deputy who was moonlighting as mall security chased him, but the gunman shot his only victim in the parking lot before running into the theater. Nobody was killed (off-screen, at least. What the on-screen death toll was that night I don’t know.)

A number of shootings happen in the United States every day, so odds are that a theater will be the scene of one now and then. I doubt that this incident indicates that the Mayan Palace 14 is any more dangerous than the average public place in San Antonio. I’m sure that far more people are killed or injured in automobile accidents while driving to and from theaters than are killed or injured by being shot in theaters.

I was there today and on their evacuation plans that are posted on the back of each auditorium door it shows only 13 screens. Is this the “Mayan 14” just to avoid advertising a superstitious 13? Or did this have an annex building once upon a time similar to the Rialto Piccolo or the annex at Northwest 10/14?

This house was quite a large operation from the beginning. An article in the February 26, 1973 issue of Boxoffice said that ground had been broken for a two-screen addition at Santikos' Century South Theatres. 1,000 seats would be added, bringing the total capacity for the four screens to 3,200. If that’s correct, the two original auditoriums from 1968 must have seated 1,100 each if they were true twins.

This opened as the Century Plaza South with four screens on October 1st, 1969. It never was a twin before. Grand opening ad posted.