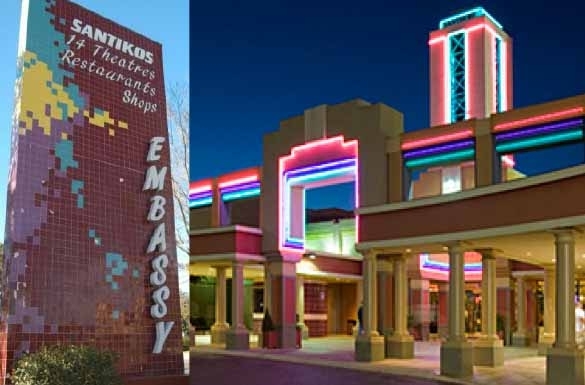 Were there two Santikos multiplexes called the Northwest? A Wikipedia article on Santikos Theatres says that the “Northwest 10” was the second Santikos theater at this intersection, and also says that it had a four-screen annex which had been closed for repairs, and then two of those screens had been reopened.

The 1976 Boxoffice item said that the Northwest Six had pairs of 400, 500, and 600 seat auditoriums. If it isn’t the same house as the Northwest 10/Northwest 14, does anybody know what became of it?

The Northwest was originally a sixplex built in 1976. They added four screens in the early 80s, and built the four screen annex in the late 80s.

It was once the premier theatre in San Antonio. The annex is usually closed. The ten in the main building are always in operation. The 10 screens were converted (badly) to stadium seating in the late 90s. The annex is still sloped.

There are a few small photos of the Santikos Northwest Six Theatres illustrating this single-page article in Boxoffice of August 2, 1976.

Linkrot repair: The August 2, 1976, Boxoffice article about the original Northwest Six can now be found at this link.

The Northwest 6 had a soft VIP opening on April 15, 1976 and was first opened to the public on April 16, 1976. The info in the Box Office article is accurate. David Sadler, Opening Manager.