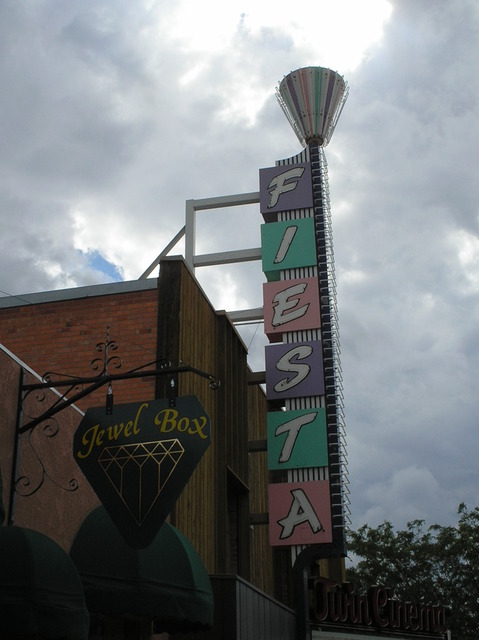 Seen Here of the Fiesta that I took back in November of 2008.. Enjoy!

This theatre is fully digital with 2S and 3D.

I drive over to Cortez in time to see the Fiesta Twin and its signage light show. The upright cycles through a few changes before completely illuminating. New pictures in the Photo section.

Given its Min Street location and its modern style, I think it’s very likely that the Fiesta Twin is the same house that opened in late October, 1948 as the An Le Theatre. It was built for Montana businessman and rancher John Survant, who named the theater for his daughter. Survant then also owned the Cortez Theatre, as well as the Orpheum and Roxy theaters in Glasgow, Montana.

The An Le was a long time coming, based on this note in the Jan. 18, 1947 issue of Motion Picture Herald: “John Survant is resuming the building of a new theatre at Cortez, Colo. Theatre was started previously, but construction was stopped by CPA after foundations were in and one wall up.”

Boxoffice, Sept. 5, 1977: “The Fiesta Theatre, Cortez, Colo., is to be closed this month in order to complete renovation work. The theatre is scheduled to reopen in early November as the Fiesta Twin Cinema, which will seat approximately 270 on one side and 230 in the adjoining auditorium. The theatre is owned by Allen Theatres, which is headquartered in Farmington, N. M.”

Boxoffice, Sept. 18, 1948: “CORTEZ, COLO. – The new theatre here has been named the Anle in honor of Anna Lee Survant, daughter of owner John Survant. Manager Owen Maxey said the theatre probably would open between September 15 and October 1, as soon as finishing touches have been added to the construction job.”