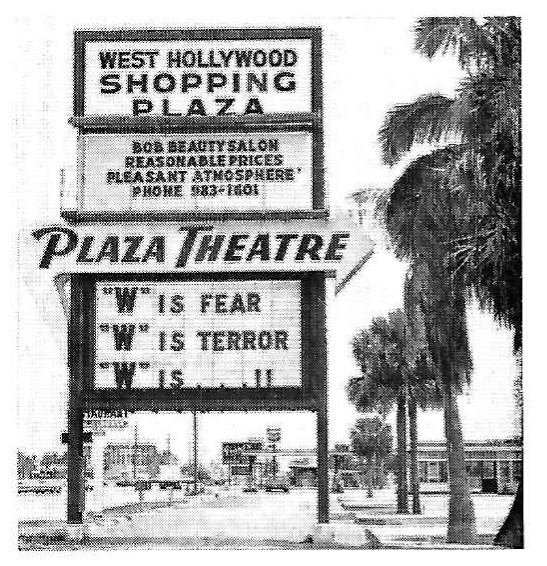 Located in West Hollywood. The Plaza Theatre opened on August 21, 1961 with Dorothy Malone in “Beach Party”. It was twinned in 1974.

A Wometco House. The only thing I ever saw there was PHANTASM II in 1988 and I remember it being a little run-down then.

Loved this theatre. It was across the road from the Hollywood Fashion Center, THE mall in Hollywood in the lates 70s/early 80s. The auditorium was twinned by the time I started going to it, but I still remember both theatres being enormous. The houses were very deep and the outside marquee was HUGE! Saw dozens upon dozens of movies here- Candleshoe, Invasion of the Body Snatchers, China Syndrome, Flash Gordon, The Empire Strikes Back, Blow Out… And I recall that around 1982, they became very relaxed in their ticket purchasing policies. If an adult bought you a ticket to an R rated movie, you could go in unaccompanied. My mom would always by the tickets for my friends and I and we got to see stuff like Porkys, Fast Times at Ridgemont High, Cat People, Amityville II-The Possession… I even saw Butterfly, the Pia Zadora dud, here. Needless to say, my mom was the most popular mother of all my friends. Also saw The Cotton Club, Twilight Zone-The Movie, Yellowbeard, The Flamingo Kid, A Chorus Line, Jewel of the Nile, The Terminator… tons more. This was my 2nd favorite theatre in all of hollywood, right after the beautiful (but rundown) single screen theatre on Hollywood Circle which showed second-run movies and sold ice cream. Man, I could write a BOOK about that place.

Kieran, the Hollywood Cinema (on Young Circle) is now on Cinema Treasures:

Would be very interested in your reminiscences of your place (I was only there once in its waning days).

Thanks for posting that photo, Harvey. I don’t know why, but since I have come on here, I have had several dreams about being in this theater, usually with something disastrous happening. And I remembered the outside being way bigger, so it was good to see a real photo.

Picture would have been better if more of the theatre was shown.But at least a picture remains.

I worked in the Plaza theater as an usher, my best friend Michael R Father managed the theatre so he got me the job it paid $1.00/hour!! But I watched all the best movies. The Plaza Theater was a step child in Wometco Enterprises the like size theater at the 163rd Street Shopping Center was their star. I had a great time working there, met some of my best friends at that place: Tony S, Molly L, Walter O, and Blinda R Tony and I would change the two Marques which was a massive job due to the size. I remember across the street was a large empty field, we watched as the Hollywood Fashion Center was built, it was never an attractive mall, I left the Plaza when the Richards Department Store opened. I have many fond memories of the Plaza Theater, it is now some kind of Church