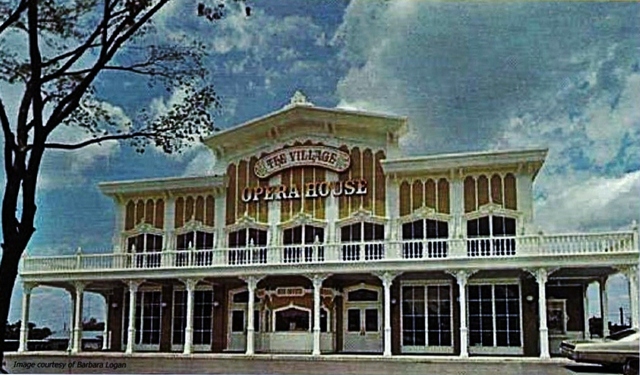 The Opera House Cinema was opened on May 15, 1969. This cinema had columns in front of it and resembled an old Southern mansion and was white, I believe. It was located in the University area and often got great exclusive movies. It was a General Cinema theater as far back as 1971. It was closed in 1985.

The Village Opera House was opened as a reserved-seat roadshow house on May 15, 1969. The first attraction was “Sweet Charity.” The house was conceived by designer Peter Wolf as a “Victorian Jewel Box.” The house, initially operated by Tejas Theatres, was part of a themed project called 1849 Village, but the style of the theater building was much more later Queen Anne-Eastlake than it was the Greek Revival still predominating in the 1850s. If the theater was typical of the buildings in the project, 1879 Village would have been a more appropriate name.

The May 26, 1969, Boxoffice item about the opening failed to mention the seating capacity but said that the screen was 20x46 feet.

A photo of the lobby of the Village Opera House appeared on the cover of Boxoffice, August 18, 1969. The caption says the new road show house seated 520.

The Opera House during 1977-78 had a 39-week engagement of the original “Star Wars,” the second-longest single-theater run of the movie in the Dallas/Fort Worth area. (The longest was a 54-weeker at Northpark I & II.) The Opera House booking included a mid-run upgrade to Dolby Stereo, which probably contributed to the unusually long engagement.

1700 South University Drive would be a closer address than the one above.

The map at the top of the page is way off-base—-the theatre was quite a bit further south, closer to TCU(it was right on the edge of the lower Trinity River).

I love this movie theater because their buttered popcorn was the best out of all of general cinemas theaters, plus like the other reviewers said, they played only exclusive road show movies at this theater I went to see earthquake here probably for 10 times and I didn’t realize back then that those SENSURROUND speakers were subwoofers anyway I hated it when they tore it down to put in a strip mall but it always showed the best movies I believe that Earthquake ran for about 10 months maybe longer if I’m wrong somebody correct me because I would like to know. Thank You