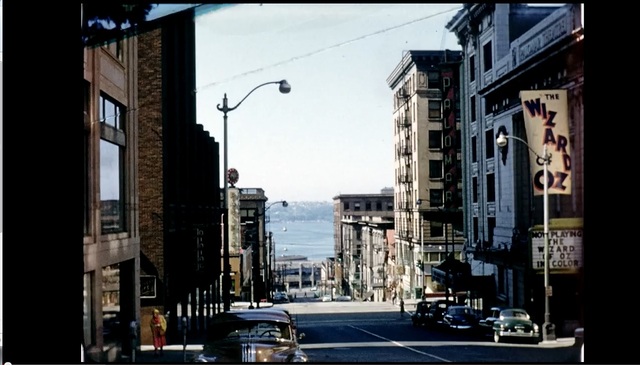 In the first comment on the page vodvilnut gives a date of 1915 for the construction of this theatre, but the PSTOS page Lost Memory linked to last January gives a construction date of 1911. Both dates also appear at various other sites on the Internet. Can anybody confirm one date or the other? I know that B. Marcus Priteca designed his first Pantages Theatre (in San Francisco) in 1911. Could he have designed and gotten the Seattle house built as well in that same year?

About the two Pantages Theaters construction dates… there’s an article on Alexander Pantages in the Pacific Northwest Quarterly (October 1966), and on p. 142 it states the new vaudeville house at 3rd and University had to wait until his Canadian theaters were completed, and they were still under construction in 1914. Also, it seems to imply that he didn’t even purchase the land at 3rd/University until 1912 or later. The ticket image on the PSTOS site is too blurry to tell if it belonged to the first or second Pantages. I’ve read elsewhere that the first one closed in 1914, so perhaps the ticket was from there?

Here is a movie program from the Pantages Theatre from April, 1929. The program is so jam-packed full of ads that it is difficult to tell which movies are actually playing.

If this house opened in 1915 as the Pantages, and became the Palomar in 1936, when was it called the Rex? I found a reference to John Hamrick being the manager of the Rex Theatre in Seattle in 1917. Could it be that the first Pantages (opened about 1905 at 2nd and Seneca) became the Rex, and not this house?

The source of the AKA’s Rex and Mayfair appears to the the PSTOS page for this theater, but this photo from April, 1965, just two months before the house was demolished, shows the Palomar vertical sign still in place.

This article from The Seatlle Times says that the Pantages became the Palomar in 1936, and doesn’t mention the AKAs Mayfair or Rex.

Maybe somebody with access to old city directories or other such sources can find the Rex and Mayfair names attached to some other theater. I suspect the first Pantages is the most likely candidate. PSTOS might have conflated the histories of the two theaters. They definitely got the opening year of this house wrong, and it apparently never had any names other than Pantages and Palomar.

I had many great experiences at this theater including when one Sunday evening (about 1948 or 1949) my father took me there and Desi Arnaz was on the bill playing his bongos and flirting with the women. I also especially remember that Harry Blackstone (the magician) made annual appearances at the Palomar. I was also attending a matinee of a Tarzan movie in 1949 when a 7.1 magnitude earthquake hit Seattle.

I think the Mayfair was to be the original name of the Music Hall Theatre. This theatre was never really named that and it’s original name was The Fox. Always one of the most impressive theatres in town. 7th and Olive.

There was Rex Theatre on 2nd Ave south of University St.I believe it was next to the Savoy Hotel. The Rex closed when sound came in c1930