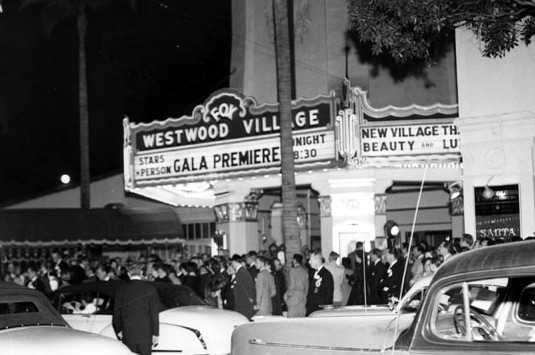 Located in Westwood Village, a purpose-built retail, leisure and residential development which was constructed in 1929. The Fox Village Theatre opened on August 14, 1931 with Marie Dressler in “Politics”. It is designed in a Spanish Mission style decoration (similar to the Carthay Circle Theatre, Fox Arlington Theatre, Fox Florence Theatre). It was built for the Janns Corporation and was later taken over by Fox West Coast Theatres chain. A feature of the building is the huge ‘wedding cake’ tower which is still virtually unchanged today, and still sports its original neon lighting. Seating in the auditorium was provided for 1,489 in orchestra and balcony levels. The backstage areas, including dressing rooms and storage areas were bricked off in the 1940’s after ‘damage’ although what kind of damage is not stated in any current sources.

The Village Theatre was remodeled and reopened on October 18, 1951, increasing the seating capacity to 1,535, and given a ‘Skouras’ look when plaster gold swirls were added to the side-walls near the stage area, along with upgrades for the exits, lobby and new seats and carpet were also added. Also at this time the California Gold Rush artwork in the lobby was added. (You can see the same artwork in a few other Fox houses in Southern California like El Portal Theatre (North Hollywood), California Theatre (Huntington Park).) The artwork near the restrooms, was also added during the renovations. Before that remodel there was a small patio outside, but this was bricked over and the artwork covers this area now. The Village Theatre stayed the same until the late-1970’s (except for the new CinemaScope equipment in the 1950’s).

For “The Deer Hunter” engagement, the Village Theatre got new 70mm projection equipment, a new larger screen, and a new main title waterfall curtain. The old screen was half as tall as it is today. The theatre also got a new, less flattering carpet in the early-1980’s.

Fortunately, the “Fox” tower sign was refurbished in the late-1980’s.

The last remodel was around 1998-99, when the Village Theatre got new seats and carpet, and now seats 1,341 people.

After more than 70 years as a first run movie palace, the Village Theatre is still one of the sites for Hollywood’s biggest movie premieres.

Regency just announced that Dunkirk will play here in 70mm! I cannot remember the last time they played that format here, perhaps it was Titanic.

https://www.thx.com/blog/thx-launches-worlds-first-thx-ultimate-cinema-at-regency-westwood-village-theater/ this is great news!!!

Came her Sunday 5.12 for the 11.30am showing of Endgame. The theater now boasts it as a THX Ultimate Theater. The changes are not that noticeable, but welcomed.

Sound: The sound is much more discreet, and not so much in your face. I always thought this theater had the best sound in LA (I know I am in the minority on that opinion=), and whatever they did for this upgrade improved an already impressive system. Real nice THX Ultimate trailer showed before the film.

They still use Dolby Atmos and show the trailer before the movie.

Picture: The picture is light years better then what it was. First off, the screen is bigger. Its maybe just a few feet wider, but there is no more room for the screen to get any larger. It appears they pulled it as wide as they could. The manager confirmed with me that the screen was replaced with a slightly larger screen.

The new laser projection was amazing.I previously saw this movie at a Dolby Cinema, and this was just as good if not better.

The exterior was used in Once upon a Time in Hollywood. 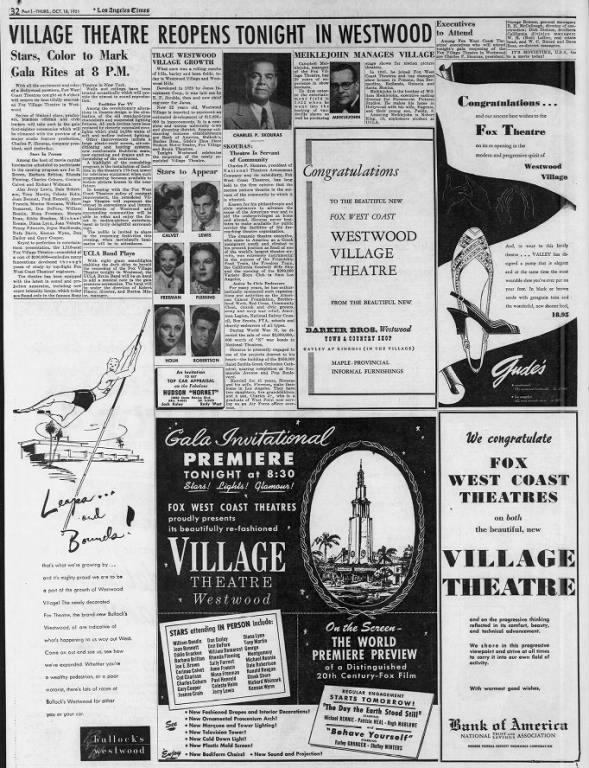 70mm is coming back to Westwood! We can’t say more right now but exciting things are coming together!

Regency Village and Bruin Theatres - Westwood, CA is feeling excited. November 12 at 12:00 AM · Our 90th anniversary continues November 26th at the Village with the EXCLUSIVE Engagement of the new Paul Thomas Anderson film, Licorice Pizza featured in 70mm Film! Being a master filmmaker, his films are inherently amazing so put on your best threads and boogie over now…and don’t stop and smell the magnolias. There will be Red Vines!

WSS had its world premiere in NY’s Rivoli theater then had its Hollywood premiere at Grauman’s. When did it get to this theater? Even in LA I would think Grauman’s would have it exclusively first run.

I stumbled on this website not long ago, and was intrigued by all the comments on the Village.

I was Assistant Manager for about 3 ½ years in the early 70’s, when Westwood was considered the “hot” film place. We had a number of premiere events, and the theater was very busy.

I was among the first in Los Angeles (outside of the studio) to see “The Godfather” prior to its debut at the Village. Al Ruddy (one of the producers) brought the film to the theater one afternoon before the premiere to check out how the film would play at the Village. Ruddy, the projectionist, and I were the only people in the theater at the time. After seeing the movie, I knew we’d be VERY busy for a long time.

At the premiere, about halfway through the presentation, Mario Puzo emerged from the theater into the lobby with about a foot-long, inch diameter cigar, and lit up. We had an interesting conversation about the film, the book, and how he was doing since the book’s popularity. He shook his head sadly, and admitted that he “had gambled away everything I made on the book and the film” and that he was compelled to “write the crap screenplay for ‘Earthquake’” in order to pay off his debts. I asked whether he had been worried about offending organized crime with his depiction of “the Mob,” and he replied that “no, I had a lot of help from that corner.”

Walter Matthau and his son PAID to see Matthau in “Plaza Suite” when it played at the Village.

We often had lines round the block for popular movies. At one point, Groucho Marx came by with his companion, Erin Fleming, and requested to be let in before the line. He said “You wouldn’t deny admission to a living legend, would you?”

We had the premiere of “Jonathan Livingston Seagull” at the Village, for which Neil Diamond wrote the soundtrack. The film was so poorly received that one night, for the prime-time showing, no one had purchased a ticket by the time the show was supposed to start. The projectionist ran the film through the projector without firing up the carbon arc, to save carbon (the rods would actually burn up and had to be periodically replaced). Neil Diamond arrived at the theater about 15 minutes into the show, and we quickly informed the projectionist to start the arc, just in time for Diamond to enter the theater. He came out about 5 minutes later and asked “Am I the only person in the show?” When I answered “Yes” he shook his head and started to walk away. I told him that I thought the music was really good, but the film was crap, and he agreed. He said “I wish I’d never been involved in this junk.”

Finally, one of the commenters down thread had asked “What became of the former manager Jim Peters?” I can answer that question. He was let go after it was revealed that he had been faking refunds and pocketing the money. One of the cashiers and I had informed the District Manager that he was raking in about $20-$30 per night doing this. Small potatoes per day, but it added up. Peters claimed that he was using the money to renovate the Manager’s office, but the District Manager didn’t necessarily believe that story. However, Peters wasn’t actually fired, just moved to a smaller, less important theater. The cashier and I had to work with Peters for about 2 weeks after informing on him (before he was transferred) and I can tell you, it was NOT FUN. But since he had basically forced the cashier to participate (she had to sign the refund forms) she would have been complicit in the crime, and I didn’t want her to be implicated.

Many more stories about Westwood and the theaters there at that time; it was a “happening place”. I often contemplated writing a book!