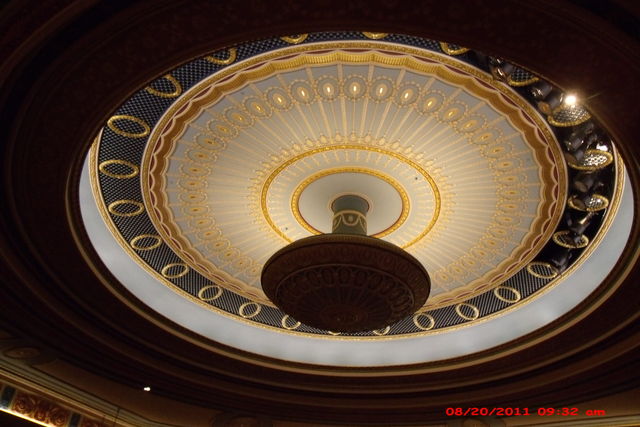 Local Elkhart businessman Harry E. Lerner had "a theatrical palace" built in 1923, and named it the Lerner Theatre. It had its grand opening a year later on November 24, 1924.

Built in an Adamesque style, its façade featured four two-story tall Ionic columns with three large arches in between. The pilasters to each side are in a Renaissance Doric style.

The classical theme was continued inside, with ornate multicolored inlaid marble floors on the main lobby and lounge floors. The auditorium, with its domed ceiling, huge chandelier and balcony, resembled a European opera house of the 19th Century. Its large stage and proscenium arch were decorated with gilded plasterwork and the seats covered in deep red upholstery.

The Lerner Theatre originally featured mixed programs of vaudeville, film and its house orchestra, and was instantly a success, playing to packed houses and hailed as the city’s finest theatre. It was equipped with a Kimball 2 manual 8 ranks organ.

In 1931, the Lerner Theatre was taken over by Warner Brothers, who operated it for just a couple years under the name the Warner Theatre. It was during this time that the theatre received a spectacular new marquee – a huge vertical marquee spelling out the theatre’s name in bold letters which could be seen up and down Main Street.

The Warner Theatre was leased to the Illinois-Indiana Theater Company in 1934, the same year it was renamed the Elco Theatre, after a county-wide contest.

Manta & Rose Theatres acquired the Elco Theatre in 1940 and operated the theatre for another twenty years. It was during this time that a new, Streamline marquee was added with the new name (the old vertical marquee was taken down). The interior also received a modernization, including concession stands in the lobby.

From 1961 until it was closed in 1987, the Elco Theatre was run by William Miller and his family.

In 1990, the theatre was purchased from the Miller family by a non-profit group called Premier Arts with the intention of restoring the Elco Theatre for use as a performing arts venue.

However, by the mid-1990’s, the city of Elkhart became involved and with funding from the National Endowment for the Arts beginning in 1996, restoration work began in earnest, returning the grand old theatre to its 1920’s splendor. In 1997, the Elco Commission for the Performing Arts was created.

Since then, restoration work has been ongoing, while at the same time the Elco Performing Arts Center now hosts a wide variety of performing arts on its stage year-round. New generations can now appreciate this historic and beautiful theatre as generations did before.

Further renovation was begun in 2010, with completion expected in 2011. The theatre has now reverted back to its original Lerner Theatre name.

I think strongly that there is only one firm and that the name is Karl Martin Vitzthum. I have letterhead with his signature dated May 16,1927. K M Vitzthum & Co. Inc., K M Vitzthum Architect. At that time their office address was 307 N Michigan, Chicago, IL.(aka the Bell Building, built by them in 1923 for Herbert E Bell) In the upper left corner: K M Vitzthum, President and John Joseph Burns, Vice-Pres & Treasurer. They were partners from about 1923 to 1956 when J J Burns died.
I also have a copy of the 1918 WWI draft registration in Chicago of Karl Martin Vitzthum with his signature again
It is unfortunate that somewhere along the line, the name was misspelled and has been repeated. I have seen it misspelled in a number of articles and will try to contact them all.
Aside from skyscrapers, they built banks, churches (see St Peter’s in downtown Chicago), theaters, court houses, jails, and commercial buildings. Also before becoming partners, they both worked for 15 to 20 odd years for Eames and Young of St Louis.

trying to contact ms. kathy burns as john joseph burns is my great-grandfather on my father’s side – is this “aunt kathryn” or a different kathy I am unaware of – I’m just starting my research on J J Burns – I would greatly appreciate any info you could provide me –

This article about the ongoing restoration work and the official website both indicate that this theater is again being referred to as the Lerner Theater: View link

The Lerner Theater had it’s grand re-opening in June. It’s expanded facility includes a new ball room, and larger lobby. It has had a complete restoration, and everything I have seen online and in local media shows a job nicely done. As far as I am aware, the only thing missing is the Lerner’s Kimball theater organ, which was sent for rebuilding, and was not expected to be ready for the main re-opening. I hope to post here when that happy event happens. It will make the Lerner one of a lucky group of theaters to have their original organ playing in it’s original setting. Makes you think of the glory days of the N.Y. Roxy, which had not one, but 3 Kimballs! The Lerner Theater website is : lernertheater.org. C-y'all l8r! ==Sam==

Here is a nice early view

Bryan, one correction to your excellent description at the top of this page: the 4 tall center columns and the frieze are Ionic, rather than Doric. The pilasters to each side are Renaissance Doric inspired. Not that this makes one whit of difference. Does this make me the architectural equivalent of one of the “grammer police?”

As mentioned on this site’s listing for the South Bend (Ind.) Granada theater, the architect for both theaters was K.M. Vitzhum, who also designed several buildings in Chicago, including a bank, and another building 24 stories tall.

The installation of the kimball theater organ started this week! It is up and running, but needs final finishing which could take an additional 4 weeks. I’ve been watching for this since the 90’s and now here it is, finally!!!!

A lot of the voicing for the Kimball organ was done by Clark Wilson, house organist at the Ohio Theater in Columbus.He is an excellent musician, and last March he played this instrument, accompanying a silent movie presentation. He preceded that with a series of numbers on the organ to show off it’s capabilities. I hope he returns to play it again!

Broan’s link to the drawing of the Lerner Theatre is dead, so here is a fresh link. A photo of the Lerner appears at the bottom of this page of a promotional booklet published in the late 1920s by the Federal Cement Tile Co. of Chicago.