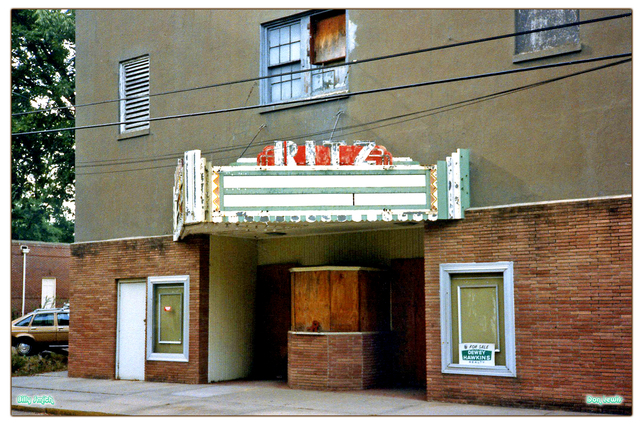 The Ritz Theater was opened in 1936. In 1986 the theater had a typical marquee extending from the building that sheltered a recessed and boarded up entrance and outside ticket booth. "Ritz" was spelled on top of the faded but colorful and decorative marquee. It was for sale and had been closed since at least 1982.

My fond memories of The Ritz Theatre are early to middle 70â€™s only. As a student at Ole Miss this was one of three theatres in town. The others being Cinema 6, a one screen theatre located on Hwy 6, and The Rebel Drive-In. Cinema 6 played the first class films such as â€œBlazing Saddlesâ€, â€œKellyâ€™s Heroesâ€, and â€œThe Towering Inferno.â€ The Ritz was the one that played the films every immature college dude wanted to see. I remember standing in line for â€œWilber and the Baby Factoryâ€, â€œMidnight Plowboyâ€, â€œThe Pig Keepers Daughter, and the great â€œThe Stewardesses In 3D.â€ I do remember seeing the excellent film â€œLady Sings the Bluesâ€ at this theatre and several other good films. All the theatres in town were operated by Martin Theatres, which eventually became Carmike. The City Manager always had a good time promoting the films at the Ritz, which I especially remember the Miss Baby Factory Contest for Wilber.

As time moved forward, and Cinemark opened a four-plex at the then new Oxford Mall, the Ritz Theatre along with the Cinema 6 (by then a twin theatre and just called Cinema Twin) was closed. The Rebel Drive-In was long gone. I believe this was around 1983 or 84. The four â€"plex is now the Oxford Studio Cinema.

I second what Don wrote.More great stories from Allen.

According to an article in the Oxford Eagle, quoted in the June 25, 1955 issue of Boxoffice, the Ritz opened in 1936.