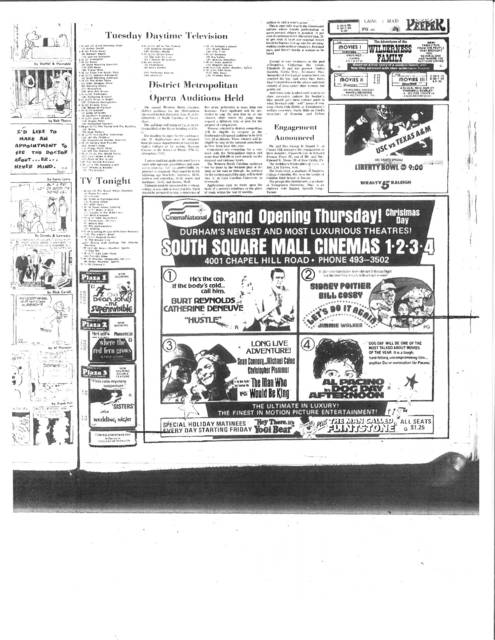 The South Square Mall Cinemas was located on the lower level of the shopping center next to two department stores(one of them was JC Penney, and the other was next to at one time the former Montgomery Ward department store and later on Ivey’s, aka Dillard’s department store).

When it opened on December 26, 1975 (the same time the South Square Mall made its grand opening as one of Durham’s largest and most popular shopping centers) the theatre was very small and the screens were not enjoyable (some of them looked like a school classroom instead of a movie theatre, much less an art house cinema). The seating was limited and basically it shows when compare to some of the other moviehouses at the time when the South Square Mall Cinemas when up against the competition with rivals The Yorktowne, The Center, The Northgate Twin, and the Riverview Cinema not to mention the Plaza Triple in nearby Chapel Hill.

However, it was the first multiplex cinema to open in Durham, and small as it was, the theatre did great business until the early-1990’s, when it closed its doors to make way for another theatre, the Wynnsong Cinemas, which was in fact a better theatre with state of the art seating and bigger screens. The South Square Mall Cinemas remained in business from 1975 until 1994. The theatre and the mall itself were demolished in 2001.

They must have been pretty good size classrooms if you look at the seating capacitys.No movie palace but not that small.

***Cinema National which owned and operated the South Square Mall Cinemas from 1975 until 1984,operated many cinemas in the greater Syracuse,New York area and all of the New England and Southeastern states. The chain was bought out by Loews Incorporated(or Loews Theatres)in 1984. Boston-based USA Theatres(which took some of the theatres that Cinema National operated)took over the South Square Mall Cinemas' operations until the early 1990’s which Carmike Cinemas acquired the theatres' operations until it closing in either 1992 or 1994.

FYI: If I had the “ad” from the Durham Morning Herald…. A lot of Disney re-releases(most of them Disney cartoons) played here at the South Square Mall Cinemas during the 1980’s and 1990’s “Lady and the Tramp” “101 Dalmations” “The Rescuers” “Sleeping Beauty” “Pinocchio” “The Sword In The Stone”

“Song Of The South”–(yes,and it played there for a week in 1986,when their were protests outside the cinema telling people NOT to see this movie and to boycott it!!! Only in Durham and at the height if the X-Mas Season! And this was a Disney flick that they re-released in theatres during the Holidays)

I sure thought “Song of the South” was pulled out of release long before 1986,Interesting.

Don’t let the signs fronting Chapel Hill Boulevard fool you. The theatres are hidden in the back of the shopping center between Montgomery Ward and J.C. Penney,behind the lower level of the parking deck. This was the worst movie theater in Durham with it’s classroom size auditoriums that lasted in operation from 1975 until 1994. It closed in 1994. The mall itself was demolished in 2001.

On The Marquee around Christmas 1980….. Screen III-“Raging Bull”-with Robert DeNiro-®

The Opening Attractions for the Grand Opening of the South Square Mall Cinemas on December 26,1975 were:

Screen 3: Michael Caine in THE MAN WHO WOULD BE KING

Screen 4: Sidney Poitier in LET’S DO IT AGAIN.

Seating capacity for Screen 1 was 250

Seating capacity for Screen 3 was 250

Seating capacity for Screen 2 was 150

Seating capacity for Screen 4 was 150

This cinema closed in 1994 when Carmike Cinemas built a huge 10-screen multiplex theater located near South Square Mall at the intersection of Shannon Road and Martin Luther King Parkway that opened later that year.