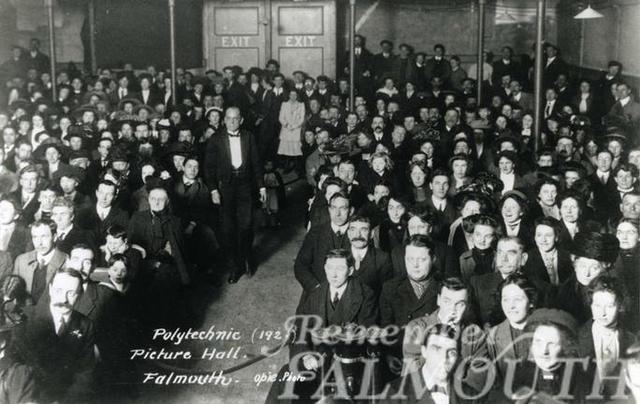 Built in 1835 as a home for the Royal Cornwall Polytechnic Society, it was designed by architect George Wightwick. From 1889, performances of dramatic plays were allowed. In around 1919, it was converted into a cinema, known as the Polytechnic Picture Hall. This lasted into 1936, when it was taken over by the Union Cinemas chain and immediately closed. In 2000 it became the Falmouth Arts Centre and in 2006, it was renamed Poly Arts Centre.

Due to the economic climate, the Poly Arts Centre was closed in January 2010, but was re-opened later in the year.

At the last look on the Poly’s website, this venue now appears to be open after much hard work from volunteers. Looking at the current programme, the venue will be used to exhibit films and host live performances on a regular basis.

In July 2013 (when, despite the camera data, my photographs were taken) the Poly was showing an excellent range of limited release/art house films (I saw ‘A Hijacking’), generally on Mondays, Tuesdays and Wednesdays. Unfortunately, funds have yet to be obtained to fully convert to cinema-quality digital – the film I saw was projected from Blu-ray. Live shows also feature in the Poly’s wide-ranging programme.

The Poly was the first cinema venue in Falmouth and continues to attract audiences from across Cornwall. We are currently fundraising to upgrade to digital and we are over half way to out £50,000 target. Please consider helping us to achieve this. You can sponsor a seat, make a donation or come along to our Beatles Night fundraising event on 10th Oct. http://thepoly.org/whats-on/film/