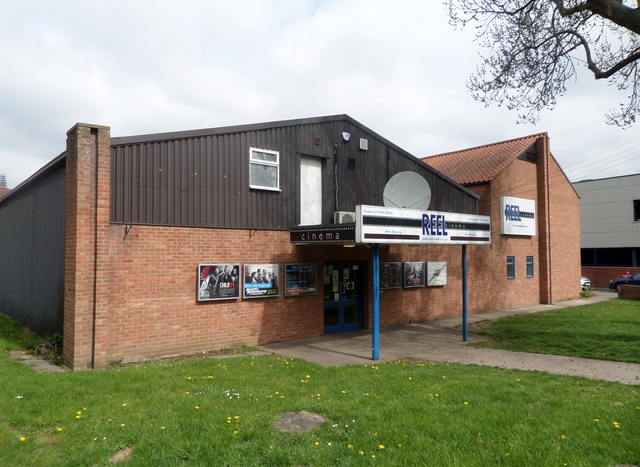 The Paragon Cinema was opened on 1st April 1983 with "E.T.:The Extra-Terrestrial". It was a single screen seating 450 and was built for and operated by independent operator Robert Sanders. In 1985 a second 166 seat screen was added.

In July 2017, a start to the project still awaited, a new set of plans emerged which does not cover the site of the existing cinema (obove), and which is planned to be closed and demolished in May 2018.

The operator has not been announced.

Still no announcement of the operator, but a start on the site next door to the existing cinema (which will close in 2018) was made in November 2017.

Savoy Cinemas (Nottingham) announced as operator of the new complex – with opening slipped to “Early 2019”.

Still planned to close the existing Reel twin cinema in May 2018 leaving the town without films for over half a year.

The cinema quietly closed on Thursday 26 April 2018 with “Rampage” in Screen 1 and “Truth or Dare” in Screen 2. Even the Reel website contained no mention of closure in the final weeks and no public ceremony or event was held on the final day. For the first time in 35 years Grantham is without a first-run cinema.

The Reel was stripped out on the 27th April, and will be demolished within weeks – starting 7th May 2018. It had been hoped to screen “E.T.-The Extra Terrestrial” on the last night but sadly there was insufficient time to arrange.

A few photographs taken on the morning after closure here:–

After several weeks of stripping out and asbestos removal, work commenced today – 12th June 2018 – on demolishing the cinema, starting with screen 2.

An album of images has been created and can be seen here:– 21st CENTURY CINEMA IN GRANTHAM

Announced 5 Mar 2019: the new building was handed over to Savoy Cinemas for the fitting-out work to begin. 5 screens, 650 seats are planned.

Announced 10 Jun 2019: Grantham Savoy will open its doors, off St Catherine’s Road, on Friday, July 19. An invitation-only launch event will be held the day before. Announced 5 Jul 2019: Walt Disney’s The Lion King will top the bill for the opening line-up at its new town centre multiplex. Tickets will be on sale from Monday (July 8) for the grand opening on July 19. Other titles will include Pixar’s Toy Story 4 along with Marvel’s ‘Spiderman – Far From Home’ and supernatural horror ‘Annabelle Comes Home.’ Adult tickets will cost £7.60 or £8.60 for 3D viewings. A child/concession/student ticket will cost £6.10 and £7.10 for 3D. A family ticket (two children, two adults) will be £24.40 or 3D £28.40.