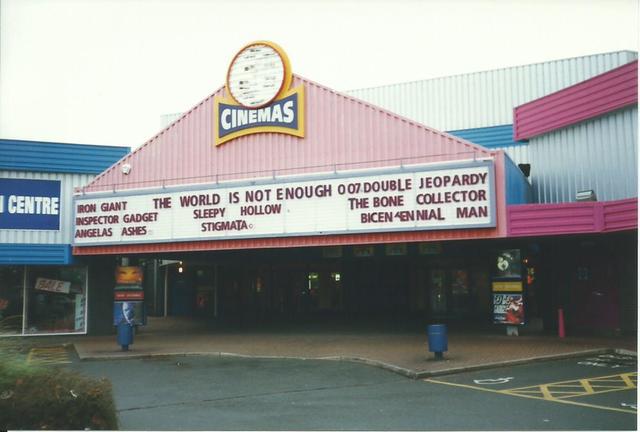 The 6-screen Cannon was a project of Cineplex Odeon and opened on 12th April 1991 with a total of 1,553 seats, with 356 seats in its largest screen and 230 in its smallest screen. It is located in the Queensgate Centre, between Old Harlow and the New Town. It was soon re-named MGM. In July 1995 it became the Virgin and in October 1999 it was re-branded to UGC. It became the Cineworld in November 2005.

By 2017 it had been reseated with larger seats and the seating capacity was reduced to 751. with 201 seats in the largest screen and 103 in the smallest screen.

I wouldn’t have wasted film on this, but digital costs little!! February 2009.

Seating capacities in this cinema were massively reduced when stadium seating was installed. Biggest is now around 240 seats.

The Cineworld here has now been joined by a brand new 6 screen Cineworld on the upper level of the Harvey Centre in the town centre. This opened on December 9th 2016.

When I paid my customary visit to the new Cineworld in the Harvey Centre, on 31st January 2017, I took advantage of the occasion to also call in at this Cineworld, which I last visited in January 2000, while it was the Virgin. I saw “xXx: Return of Xander Cage”, starring Vin Diesel, in Screen 5. I was told that seating capacities are now: Screen 1:201, 2:115, 3:103, 4:103, 5:113 and 6:116. This total of 751 is less than half of the 1,553 stated under its previous branding. Judging by Screen 5, this appears to be more to do with newer, wider seats than any significant re-stepping of the seats. But the cinema is in fine shape; between them, the two six-screen Cineworlds finally provide the town with the multiplex capacity it deserves.

The original auditoria here had raked flat floors. The stadium seating was achieved by building wooden stepped sections in the centre of the floor with passages either side for access. I know the manager and saw the work in progress. This method is very wasteful of floor space hence the marked reduction in seating capacity, though no doubt wider seats and increased seat pitch also played their part.