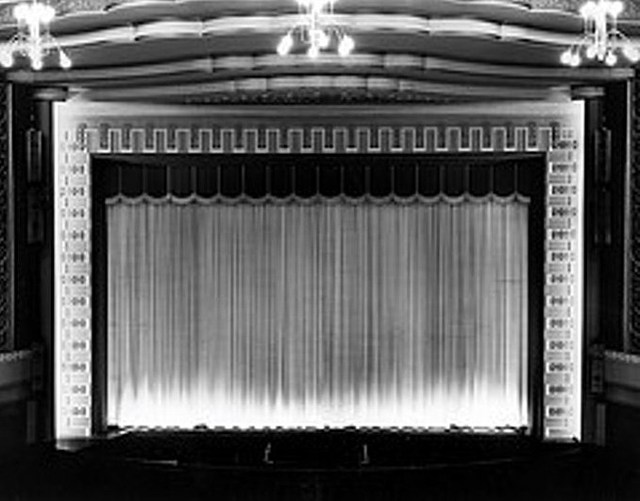 Built on the site of the Theatre Royal (1813-1937, architect J. Foulston), the Royal Cinema was built for and operated by Associated British Cinemas(ABC) and was designed by their in-house architect William Riddle Glen.

The Royal Cinema opened on 15th July 1938 with Katherine Hepburn in "Stage Door" and Cesar Romero in "Dangerously Yours". It is a handsome building externally and is faced in white Portland stone. Originally it had a seating capacity of 2,404 (1,564 in the stalls and 840 in the circle). It had a well detailed Art Deco style scheme, typical of Glen’s style of design. The Royal Cinema was equipped with a Compton 3Manual/8Rank organ with a Melotone unit and an illuminated console, that was opened by Wilfred Southworth, and was considered to be the finest organ to be installed in an ABC cinema. There was a fully equipped stage and dressing rooms.

The Royal Cinema was re-named ABC from 28th April 1958 following a renovation. Live stage shows (pop shows) were held here during the 1960’s and the last time the stage was used was for a Morcambe & Wise comedy show. The ABC closed on 30th October 1976 for conversion into a triple-screen cinema and bingo club. The final films in the original single auditorium were ""The Likely Lads" and "Steptoe and Son".

The triple-screen ABC opened on 5th May 1977 with seating for 583, 380 and 112. The Compton organ was retained in the bingo club located in the stalls area, but it was hardly ever used. ABC Cinemas passed to the Cannon Group, then to MGM from 22nd May 1992. A management buy-out brought the name ABC back again in the mid-1990’s. A Gala Bingo Club operates in the former stalls area and the Compton organ was removed from this part of the building, to be re-installed in the Blackheath Halls in South-East London. The cinemas continued and from 1st August 2006 have been operated by the independent Reel Cinemas chain. Apparently this is on a short lease, and it was announced that the cinema would close on 2nd October 2008. However, this was halted and the cinema continues on a reprieve, under independent management. Both the cinema & bingo club were closed on January 1, 2018 due to flooding but was re-opened on 7th January 2018. Renovation and redecoration work was carried out in May/June 2018 in preparation for its 80th birthday on 15th July 2018.

Sadly, the inevitable arrived on Thursday 28th February 2019, when the Reel Cinema was closed.

Back in April 2018, campaigners, led by Karl Parsons, had launched an attempt to try and transform the cinema into a thriving cultural hub, which would have seen the historic building handed back to the community, with a 1,000-seat concert hall, cinema, rehearsal space, bar & restaurant.

In July 2018 Reel Cinemas Property Director Chris Morgan-Giles said: “Reel Cinemas has taken the decision to close its Plymouth operation. We have been reviewing its performance and operation as a cinema for some time and have concluded that it is no longer financially viable to continue to operate as a result of harsh trading conditions, which have been exacerbated by a competitor Vue, and its ticket-price slashing”.

Despite the campaign, a public consultation was held last year unveiling plans by Scottish developer Structured House Group(SHG) to tear the cinema down - including its Art Deco style front - and replace it with fully-furnished flats. However, the idea of creating a 16-storey student block and hotel has since been replaced by plans to build a ‘vertical village’ block of flats aimed at ‘people of all ages’.

For the record, the final films were “How to Train Your Dragon” “Alita:Battle Angel”, “Instant Family”, “Lego Movie 2” and “The Kid Who Would be King”.

This theater is open.

Still as of 2014 displaying obsolete ABC logos around the entrance, many years after said cinema chain went defunct!

Both Bingo hall and cinema closed “until further notice” after New years flooding in 2018.

The Royal Cinema is 80 years old this weekend, the only WR Glen cinema to have continuously operated as a cinema from construction to the present day. Under threat, we have formed a Trust to try and save this delightful building, and are supporting the efforts by the current local management to promote the cinema and keep it open. If you’re in Plymouth on July 15th, please come along and support the Royal/ABC/Reel!

Stumbled across this on the Haunted History Facebook page.

History & Haunting of Plymouth’s Reel Cinema,Plymouth, Devon, England Plymouth’s Reel Cinema has plenty of claims to fame. It played host to the likes of The Beatles in the 1960s as well as many others. And now it reportedly hosts a number of ghosts. The building was erected on the site of the former Theatre Royal. And ‘Emily’ is a former actress who reportedly haunts the cinema’s ‘screen two’. Emily is said to have committed suicide in one of the dressing rooms of the old theatre. One of the projectionists at the cinema has reportedly seen a woman sitting in one of the front rows wearing a 1940s-style dress. During the Blitz a German bomb reportedly exploded near the front of the building killing a group of people rushing out of the theatre to get to a nearby bomb shelter. In 2010 a woman visited the women’s toilets and locked herself in a cubicle. She became startled when someone or something knocked on the cubicle door. On opening the door, the woman found no-one there. A strange young man has also been seen walking around another screen at the cinema. The man reportedly sits behind someone – but all that can be seen is the seat go down as if someone is sitting there. ? :/

Black Cats Paranormal Channel investigation here > https://www.youtube.com/watch?v=Zuc9EO_XdTU In 1758 a theatre was built at the top of George Street in Plymouth. Originally known as the Theatre, Frankfort-Gate, it adopted the name Theatre Royal after King George III and his family visited it in 1789. The decline in theatre-going caused by the rise in cinema attendance resulted in the building being demolished in 1937. It was replaced by the 2,400-seat Royal Cinema, which opened the following year. The cinema survived the Plymouth Blitz during the Second World War, which destroyed the adjoining hotel and assembly rooms. By 1954 the decline in cinema-going caused by the rise of television led to the cinema’s being partly converted back to a theatre and rechristened as the Theatre Royal Cinema. In 1958 it was renamed the ABC Plymouth. It is now a three-screen cinema known as the Reel Plymouth, run by Reel Cinemas.

One of the worst imaginable conversions of an ABC Theatre (under the EMI banner) in 1976.

Instead of having a full width number 1 screen in the former circle and two reasonable screens in the stalls, it was decided that EMI Social Clubs would acquire the ‘lion’s share’ of the building by having Bingo in the stalls resulting in the loss of the fully equipped stage and the famous Compton Organ which was broadcast for years on BBC Radio (Dudley Savage: ‘As Prescribed’).

The three screens, therefore, had to be ‘shoehorned in’ upstairs with the circle being split two thirds and one third whilst the grand entrance foyer was lowered to accommodate the third cinema (running along the building’s width).

Neither Screen 1 nor Screen 2 are symmetrical, being totally ‘cock eyed’ with an original ornate side wall and a ‘plain’ 1976 dividing wall – shocking!

ABC/EMI committed similar acts of vandalism at three other elaborate large capacity ‘live’ venues in Aldershot, Chester and Wigan, the results being equally as appalling.

I suppose that in Wigan it did not matter so much (no Odeon) but in Plymouth, Chester and Aldershot there were fine Rank theatres to compete with – how vastly inferior the ABC’s were to the Rank venues afterwards!

Photo uploaded of when it was a ‘proper’ cinema.

Short video about the theatre here :–

Urban explorers have gotten inside. Screen 1 & 2 projection box is stripped with screen 1’s DP75 (sprockets and motors left) and it’s cake stand (no platters). Sound racks all removed. Screens are ripped from removal of the speaker drivers. Presumably done by Reel when they closed down. Video is on YouTube (Plymouth Reel Cinema).

The Plymouth Royal Cinema Trust are working on bringing the building back as a multipurpose venue with cinema and live music. https://www.plymouthroyalcinema.co.uk/ https://www.facebook.com/groups/627143367446193/