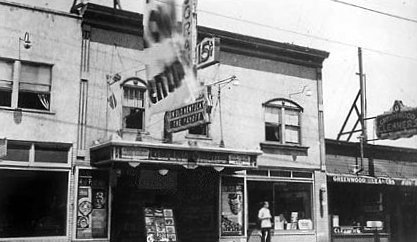 The Greenwood Theatre was listed at 8503 Greenwood Avenue in 1914. The Taproot Theatre has had many names over the years including Rainbow Theatre in August 1925, with a seating capacity for 500. It was later renamed Grand Theatre, North End Theatre and Movie House.

Formerly known as the Greenwood Grand, this theater is now the home to the Taproot Theatre Company.

The Film Daily Yearbook, 1950 lists the seating capacity of the Grand Theatre as 468.

The current total of seats at Taproot is 228. Renovation and conversion to live theater cut the number of seats.

An article in the September 29, 1909, issue of the Seattle Star said that the Grand was one of the Seattle theaters that had been designed by architect E. W. Houghton. It mentioned two others, one being the Moore, but the scan of the paper is bad and the name of the third Houghton-designed house is almost unreadable, but it was probably the Majestic, which appears in the theater listings of that same issue of the paper.

The Taproot Theatre is open, but does not appear to be showing movies. Their web site lists only stage productions. In October, 2009, a fire destroyed an adjacent building owned by the theater company, and partly burned the roof of the theater itself, leading to extensive smoke and water damage. The theater reopened within a few months. The site of the destroyed building is now being developed with an annex that will include a cafe, an expanded lobby for the theater, and a small black box theater, among other facilities.

This house actually opened in 1925 as the Rainbow Theatre. The August 24, 1925, issue of The Film Daily said under the headline “New Seattle House” that “E. H. Habrocuk recently opened his new 500 seater Rainbow Theater at 140 N. 85th Street.”

The Grand Theatre that was designed by E. W. Houghton, mentioned in the 1909 Seattle Star article I cited earlier, was not this theater, but the Grand Opera House, built in 1898-1900. It was renamed the Hippodrome Theatre in 1915. It was gutted by a fire in 1917 and was later converted into a parking garage. I don’t know if it ever operated as a movie theater.