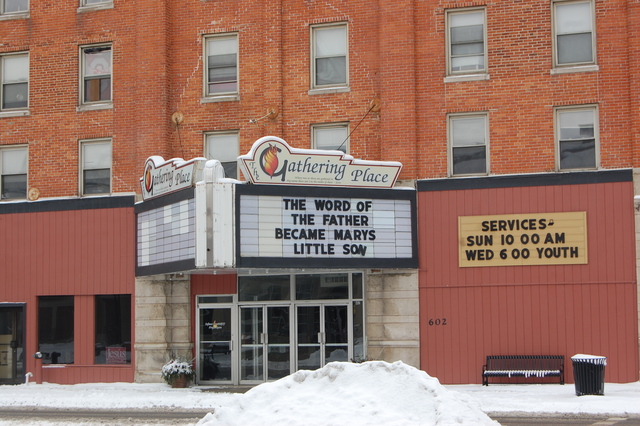 The Defiance Opera House was opened in 1892. It was designed by architect Harry G. Carter and had a seating capacity for 1,010. It was later renamed Valentine Theatre and was closed in 1994. It is currently a church.

Here is a marquee shot:
http://tinyurl.com/yjrhlv9

An article about the Valentine Theatre was published in the September 18, 2003, issue of The Toledo Blade. It said that the theater opened in 1892 as the Citizen’s Opera House. Other sources indicate that it was called the Defiance Opera House for a while before becoming the Valentine Theatre. The article said that much of the theater’s interior is still in its original state.

The Citizen’s Opera House Co. had accepted plans for the project prepared by St.Paul theater architect Harry G. Carter, according to an item in the August 2, 1890, issue of The New York Clipper. The plans called for a ground floor theater with 378 seats in the parquet, 278 in the balcony, 318 in the gallery, and six boxes, each accommodating six patrons.

The Blade article says that the building originally had a ballroom on the second floor, but this was removed when hotel was added to the front of the building. At some point the roof of the auditorium was lowered and the gallery removed. Seating was ultimately reduced to 546.

The Defiance Public Library provides this postcard from the 1910s showing the original appearance of the theater building.

In 2003, the church which had occupied the theater for several years was moving out, and a local citizens group had hopes that the city would buy the house and it would be restored to theatrical use, but the project obviously came to nothing as the Valentine is now occupied by a different church group.