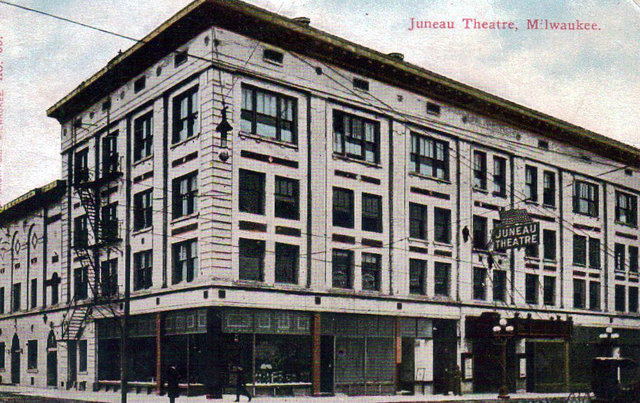 The Juneau Theatre was named for Solomon Juneau (1793-1856), the French-Canadian founder of one of the three villages which came together to form Milwaukee in 1846.

By the time it was built in 1910, this vaudeville house serving a Polish neighborhood, was indicative of the expense of building a substantial theater, and thus the fortune of the Miller Brewery was needed to complete the 120 ft. by 150 ft. four story office building surrounding the theater with four stores flanking the theater’s entry.

The Venetian theme decor’s opulence of this neighborhood vaudeville house surprised the community, for it very nearly out-Venetianed the future Venetian Theatre to be built on Center Street in 1927 for a lot more money.

Four large boxes flanked the stage and were themselves flanked by helically banded, engaged columns inspired by the similarly striped mooring posts (bollards) of the Venetian canals. They rose from the floor to a cornice surmounting the proscenium arch with courses of a blind mini-arcade and dentils the size of corbels centered by a cluster of escutcheons in the crests of Venice.

All this was painted in a palette of sky blue, golden yellow and rose red with gilt accents. The fire curtain (asbestos) featured a mural of a Venetian harbor scene showing the famous bollards and the gondolas.

Above the proscenium were three murals, the center one depicting the Venetian skyline in silhouette at sundown, flanked by similar smaller views of the area by day. Lanceolate arches throughout the house further carried the theme throughout the 1200 seats on the main floor and balcony.

That movies were becoming popular was evident by the insertion of a plaster projection booth into the balcony in 1912, this at a time when many such theaters were using asbestos board or sheet metal booths. Local architect Henry Hengels also allotted the theater eight dressing rooms and two traps in the stage floor, along with a marble-faced switchboard.

By 1927 the Juneau needed to compete with nearby movie palaces such as the Modjeska and the Granada, so it was brought up to date by a new harbor scene mural over the stage (the flanking murals were replaced by ventilator grilles to serve the new air cooling).

The upper two boxes were draped over to hide the pipes of a new 2-manual, 5-rank Wurlitzer theatre pipe organ, the console of which occupied the lower right box. The orchestra pit no longer held instruments and the vaudeville annunciator signs were blank, but the stage got its first grand drapery (a mass of five plain Austrian fold panels separated by puny jabots and poorly done) and a larger picture sheet (screen).

There was a complete reseating of the auditorium and a complete repainting of the entire theatre to attract new crowds. The Saxe Bros. local chain controlled the movies in the early days, but now it was a Warner Bros. house and the sprucing-up was demanded.

The refurbishment helped the Juneau until 1965 when the last exhibitor could no longer counter the nemesis of television and the consequent loss of audience. The darkened theatre sat idle within the active building until 1981 when a Greek immigrant bought the building.

He gutted the theater from the building in 1984 and started building condominiums in its space, but upon his death ten years later, the work was not completed pending complex probate here and among his heirs in Greece.

To this day in 2002 the condo’s windows are unglazed and open to the wind! How sad and lonely a fate for a once happy hall.

Yes, I wouldn’t mind having a scanned image of the colored post card, even black and while pictures of the building would be great. I would like to put together collection of pictures that I can enlarge and use at the building to bring back memories for those interested.
Thanks !
-dts

Yes, I wouldn’t mind having a scanned image of the colored post card, even black and while pictures of the building would be great. I would like to put together collection of pictures that I can enlarge and use at the building to bring back memories for those interested.
Thanks !
-dts

dts, et al. Mr. Jim Rankin Passed away on January 3rd, 2007. Sadly, we have lost a person with great knowledge of movie theaters in the Milwaukee area.

I’m not certain what happened with his vast collection of information.

In the 40s and 50s the Juneau theater was a Warner Brothers theater. The other Warner Bros. theaters in Milwaukee were WARNER, ALHAMBRA, GRANADA, NATIONAL, EGYPTAIN and MILWAUKEE theaters. All Warner theaters were well maintained and very popular with movie-going Milwaukeens.

Having search through copies of the Milwaukee Journal and Sentinal in the year 1954 and a bit before in recent days, I saw that those theaters were always advertised seperatly from one another, but the Fox movie houses always were under one block.

The Fox theaters were listed under one block with the exception of the Grace, Pearl, Layton and Fox-Bay which were listed with the independents, Standard chain and Warner Bros. theaters.
Larry Widen and Judi Anderson in SILVER SCREENS lists the Juneau Theater as having 1097 seats. The Film Daily YearBook for 1954 also lists it as having 1097 seats whereas the 45 YearBook states 1100.

BWChigo: This is a beautiful picture of the interior of the Juneau. I do recall that the organ was still there in the 1940s. It seemed to be covered with a tarp or canvas cover. I don’t recall ever hearing it played. I never got close to the organ. It was considered in bad taste to sit in the first rows for a movie. Everyone said you would have a pain in the neck from looking up at the screen.

Wielding axes, pinch bars, and possibly sledges, vandals caused an estimated damage of $10,500 to the Juneau theatre at Milwaukee.
There has been no labor trouble at either the Sheboygan or the Juneau theatre, and neither had there been any picketing, nor were any employes discharged.
About ten days ago In Milwaukee, ground glass was thrown into two projectors of the independent Atlas theatre, 2342 N. Third street causing about $1500 damage.

In 1970 the WurliTizer was sold to a private owner in Burlington, Wisconsin and that same year it was installed in a church in Burlington and was made playable. Anyone know what church, is it still in the church, or what has happened to the organ in the last 43 years?

“The selection of a WuliTizer Organ by the owners of the overwhelming number of the leading exhibitors from coast to coast is conclusive evidence of WurliTizer supremacy in the art of organ building.”