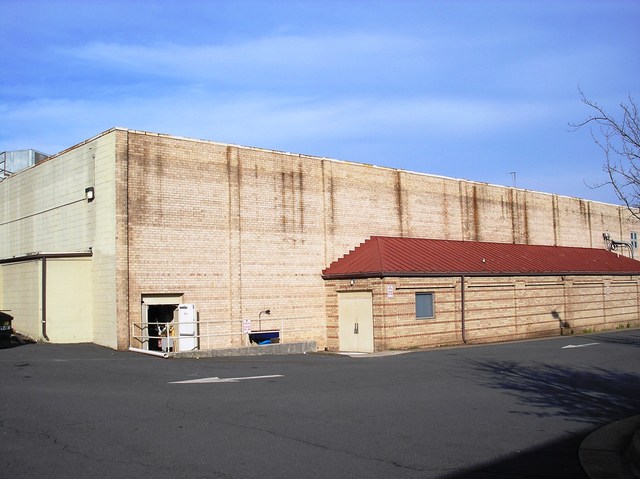 The Vienna Theatre is the only cinema to date to have inhabited this quaint little suburb of Washington, DC. This rather plain cinema was opened by Broumas Theatres (which evolved into K-B Theatres) on April 21, 1964 with the 3-hour epic movie “The Cardinal”. I became a twin in 1984 and closed in 1987. The interior of the building has since been completely gutted and converted into a bicycle retail store.

When this single was twinned, rather than cut the house lengthwise down the center, they cut across the center, and build a new screen/booth. The original width of the screens maintained, but with a very short throw from the booth port, maintaining focus was somewhat troublesome.

The slope of the floor was maintained, so screen 1 was at a gentle angle, while screen 2 maintained the slop and then curved back up to the orginal screen. The original doors to the house were retained for access to screen 1, and a new hallway was constructed on the outside of the original exterior wall to gain access to the new house. This ‘outside hallway’ was enclosed in a new construction, and the hallway had windows to the parking lot and one-sheet poster cases down the hall.

The screens were so large and the seats so close to the screen, when I saw “The Last Starfighter” there in 1985, I couldn’t read the name “Catherine Mary Stewart” without moving my head. It was literally impossible to watch the entire screen all at once.

I worked there for two weeks in 1987 when it was operated by Showcase theaters. I projected “Over the Top”, “The Color of Money” and “A Room with a View”.

When the site closed, the building was gutted and became an eye glasses shop. The old parking lot has a new building, but the original theater structure still stands.