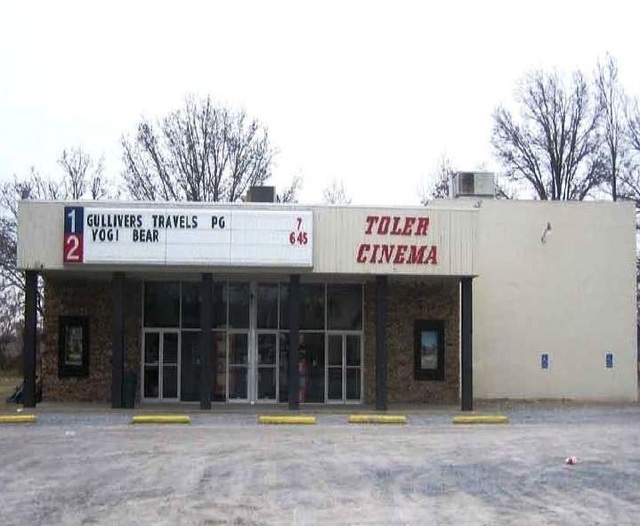 By word of Facebook, the Toler 2 is scheduled to close July 28th.

“Tommy Hammond I wanted to let everyone know that The Movie Theater in Benton is closing it’s doors July 28th. It is the last Movie Theater in Franklin County, and is being closed by AMC Theaters even though is turns a profit! The employees are not even being guaranteed work at other area AMC Theaters. the customer service hotline for AMC is: 877-262-4450 Let’s make a real effort to call and try to keep our Movie Theater!!!”

Longtime patrons of AMC Toler 2 bid goodbye to the big screens as the last movie theater in Franklin County closed at the end of business Thursday.

Toler Cinema was a draw for movie lovers since its opening by Charles Toler in the early 1970s, but AMC Theatres, which bought the cinema from Kerasotes Theatres in May 2010, targeted the two-screen theater for closure this summer.

“AMC continually upgrades the quality of our theatre circuit by adding new screens and by disposing of older screens through closures and sales,” AMC spokesman Ryan Noonan said in an e-mail. “We do, however, look at our theatres on an individual basis. AMC Toler 2 has been identified as a theatre that no longer competes effectively in the marketplace and will close at the end of business on July 28.”

The decision left many movie-goers upset and the county without a theater for the first time in decades.

“I just hate it,” said Maranda Rush of Benton. “I’ve called AMC, the real estate agency, the historic society, and tried to raise awareness on Facebook. I even tried to get them (AMC) to let me run it on a lease program but they’re just not interested. It’s the last theater in the county but they’re about the bottom line – money.”

Rush said she worked for the theater in the past and was a frequent patron.

“I loved every minute of it. It was the most family-oriented place you could think of. There was a great rapport with customers and they were treated with kindness and respect,” she said. “It’s the most convenient and cost-effective place to see a movie for a lot of us.”

Rebecca Harkins of West City attended one of the final showings of the latest Harry Potter movie at the theater. She said she doesn’t want to travel to Marion or Mount Vernon to watch a movie.

While some patrons started a call-in campaign to complain to AMC about the closure, Noonan said the theater will not reopen under AMC.

“We do not intend to change our plans,” he said.

It looks like there is some interest in reopening these theaters: http://www.bentoneveningnews.com/news/facebook/x1112599373/Former-employee-wants-Toler-Cinema-reopened

Status should be closed.

ARTICLE POSTED IN FRANKLIN COUNTY NEWS.com My teenage memories of Toler Cinema June 23, 2017 By Site Admin Leave a Comment by Steve Dunford The announcement of investors buying the Toler Cinema building in Benton, set social media on fire Monday night. This number is views on Facebook was over 18,000, the third highest ever on the nine year history of the website, and the most of any story that I have written over the last six months. I have thought of several memories that I had in the building. I remember seeing ET, Rocky III and IV, Top Gun, Rambo, and sneaking into see St. Elmo’s fire. They didn’t card me to see a Rated R movie when I was 14. I looked 25. I have probably watched other movies there. I also saw Hoosiers the first and third time there. I watched it the second time in Marion. I still watch it at least ten times a year. I have always been a storyteller. I think that is why I fell in love with Duck Dynasty, because of Uncle Si alone. My stories are like his, 95% of what I think is the truth. The farmers got some much needed rain overnight and today. Other than a line of storms that will come through late this afternoon, the rain is over. We have a beautiful five days ahead of us. I am going to share a couple things that happened at Toler Cinema. The first one was I was on a date there. I was double dating with a friend of mine and his girlfriend. We went out for pizza before we went to the 9:00 show. We didn’t hit it off very well. I thought the girl was cute, and she asked me three things that I like the most. I said sports, fishing, and rummage sales. She said she hated all three. She could not believe that a teenage boy loved yard sales. She thought buying clothes especially, was disgusting. I took a lot of ribbing from my friends for hitting up rummage sales on Saturday morning. I loved the negotiating part. I could very easily been a junk dealer and made good money. I just never had the storage space. However my buddies would take me with them when they went to buy a car. I already made up my mind this date was a one time deal. She used the pickup line that high school girls have used for decades, let me see your class ring. I let her see it. She had it in her hand and dropped it. The ring tumbled all the way to the fourth row, under a seat. I got down on my hands and knees to pick it up. There was an elderly couple that was a couple rows back. The lady got into her purse and tried handing me a five-dollar bill and said, honey you don’t have to get popcorn off the floor, I will buy you some. I quietly said I am getting my class ring that rolled down here. The stone was Ok, the ring just had a nick on it. I was a prankster back in the day. Most of you know that have known me for several years witnessed my handy work on April Fools Day. I did not participate this year because of fear someone would take my outright lies in good nature, as news stories and facts. My first car was a ’77 Mercury Monarch. My buddy Jeremy McFarland had a ’76 Ford Granada. I could start his car with my keys. He couldn’t start my car with his though. We were cruising Benton, and I forget why, but we drove through the parking lot of the theater. I said do you want to see something funny, meet me by the pool, in what used to be the Holiday Inn. I pull up in his car. We sat in the parking lot of the motel to watch him come out of the show. He walked out happy as can be, holding hands with this date. When he could not find his car he was in a panic. We all got our laughs. He started to go back in, I might have the law to deal with, or worse his parents and when they got done with me, my mom and dad would take over. I pull in front of the theater and honk and wave at Jeremy and his date. I cant remember who he was with. It was probably with his wife Kellie. He told me I don’t get even, I get ahead. I go to leave for school the next Monday. I start my car, put it in gear, and I think I dropped the transmission. My drive shaft was put on concrete blocks, with the back wheels barely off the ground. The whole time through High School, we never told any of our circle of friends we had a date, or there would have been some kind of “chivalry.” It was part out of meanness, and mainly out of jealousy. I hope rambling on about my teenage days brought a smile, and a couple laughs to you today. Feel free to share your memories about going to the show in Benton. After nearly a decade gap, the next generation will have stories to tell. Please support the new owners when they open it back up.

BENTON, IL – Today, the former Toler Cinema building in Benton has been purchased from AMC. The new investors have intentions to open a theater in the building. I have just spoken with Maranda Rush, who broke the news earlier this evening on the social media page Talk Benton. She is the former assistant manager of the theater, that closed on July 28, 2011. After AMC purchased Kerasotes Theaters, AMC closed Toler and Cinema IV in Harrisburg a short time later. The identity of the owners, and renovation plans will be released at a later date. The investment group will be issuing a press release soon. Please watch the website in the coming weeks for further information.

Opened originally as a single screen. The second screen was added in 1979.