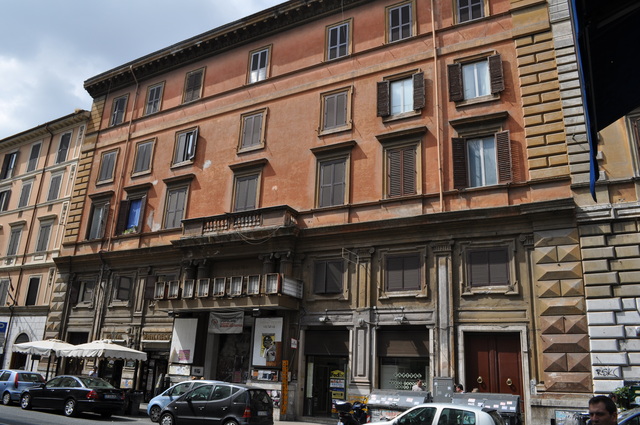 Located just to the north of Rome’s main Termini railway station, the Cinema Volturno is located in an old apartment block. Opened in 1922, the cinema has a narrow entrance and the remainder of the building is hidden away inside the block of buildings and cannot be seen from the surrounding streets. Inside the auditorium, the seating is mainly on a single floor, with a small balcony and side slips along the walls. The building is richly decorated, and there is a double dome in the centre of the auditorium ceiling. The Cinema Volturno was closed as a cinema in the 1970’s.

The name Cinema Volturno is inscribed in stone above the entrance doors. In August 2008, there is a notice on the building which appears to have been there for maybe several years. In Italian, I think its says that the former Cinema Volturno is to be converted into a bingo hall, or that it was last used as a bingo hall and planning permission for other use is now being sought. The building looked like it had not been in any use for some time.

In the Summer of 2010, the Cinema Teatro Volurno is in ocassional use for special events and concerts

The Cinema Volturno and its small canopy (marquee) can be seen mid-distance in this January 2008 photograph of the via Volturno:
http://flickr.com/photos/sanjao/2208920365/

The Rome newspaper “Il Messaggero” for May 18, 1940 has the Volturno listed as showing the films “Dietro la facciata” which was the 1936 French “Derriere la façade” and something called “Six Months of War”, plus three vaudeville shows from 4:50 P.M. to 9:50 P.M.