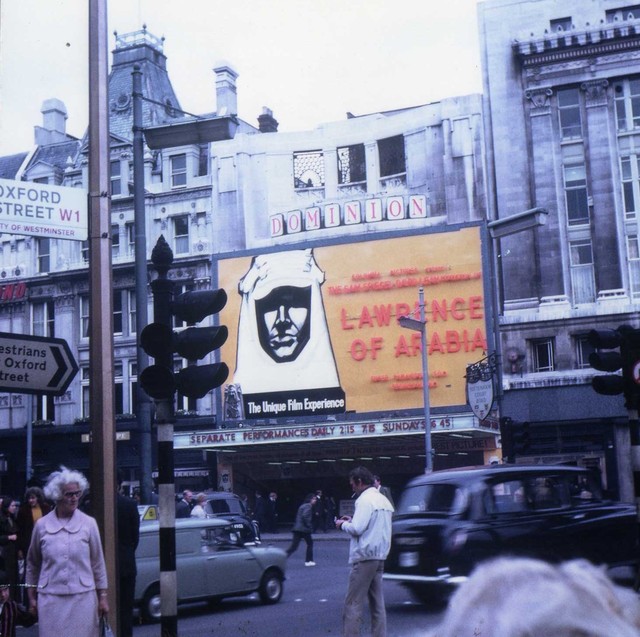 Located in London’s West End at the junction of New Oxford Street and Tottenham Court Road known as St. Giles Circus, the Dominion Theatre was built on an expanded site previously occupied by the Court Cinema and Meux’s Horse Shoe Brewery. Designed by architect’s William Milburn and Thomas Ridley Milburn at a cost of £459,727, the Dominion Theatre opened on 3rd October, 1929 with a live show;the musical comedy “Follow Through” starring Elsie Randolph which only ran for 148 performances. It was followed by another musical “Silver Wings”, which again was short lived. This was followed by a two week variety season headed by Maurice Chevalier. The original seating capacity was for 2,835, with 1,340 in the orchestra stalls, 818 in the dress circle and 677 in the balcony(upper circle) level. The proscenium is 54 feet wide.

The first film to be screened was the belatedly held British premiere of Lon Chaney in “The Phantom of the Opera” on 21st July 1930, with writer H.G. Wells attending. On 6th October 1930 it was taken over by Associated British Cinemas(ABC), but they operated the theatre for only four months. At Christmas 1930 the pantomime “Aladdin” was staged until February 1931. It was then leased to United Artists and Charlie Chaplin appeared ‘in person’ on the first night of the UK Premiere of “City Lights”, and he took a bow and spoke from the stage at the end of his ‘silent’ film in a ‘talkie’ era. In September 1931 a variety programme on stage played for a week starring Jeanette Macdonald and in May 1932, Richard Tauber appeared in a revival of “The Land of Smiles”. On 15th January 1933 the Dominion Theatre was taken over by Gaumont British Theatres and became a full time cinema. A Compton 3Manual/12Rank theatre organ was installed and there was a large cafe located over the main foyer which was eventually closed on 15th June 1957.

Occasional live shows from 1957 included one week of performances by Sophie Tucker in April 1957. Tommy Steele played for a week in May 1957. Judy Garland appeared from 16th October until 16th November 1957 in her one woman show. These live shows interrupted the films until the cinema closed on 28th December 1957 with the Norman Wisdom film “Just My Luck”. It staged one final stage production when one month of performances of “The Broken Date” performed by Le Ballet-Theatre Paris was staged in February 1958.

A Todd-AO system was installed with a screen 46 feet wide screen that had a 5 feet curvature. The balcony(upper circle) seating level was closed off and converted into offices. The cinema now had 2,172 seats in stalls and dress circle levels. A new projection box was built at the rear of the orchestra stalls that was equipped with 35mm/70mm Phillips projectors. The Dominion Theatre began a new life as a ‘Roadshow’ cinema from 21st April 1958 with the record breaking run of 4 years 22 weeks which was achieved for "South Pacific". The same print was used throughout its run, which closed on 30th September 1962. This was followed by “Porgy and Bess” presented in Todd-AO. "Cleopatra" followed for another long run and then "Sound of Music" which ran from 29th March 1965 to 31st June 1968. Following a redecoration, Julie Andrews in “Star” had its world premiere on 18th July 1968 but its subsequent run was not a great success.

On 8th November 1981, it returned to live shows with just occasional films ("Star Wars-Return of the Jedi" in June 1983).

Hit shows to play in recent years include the Dave Clark produced musical “Time” staring Cliff Richard which opened in April 1986 and ran for 2 years. In 1987, the Rank Organisation sold the theatre to developers who planned to demolished and build a hotel on the site. English Heritage designated the Dominion Theatre a Grade II Listed building in 1988. Rank leased the theatre back from the developers and the planned demolition was halted by a Public Enquiry in June 1990.

The Dominion Theatre was taken over by the American based Nederlander Theatres group and it was again refurbished with a reduced capacity of 2,069 seats. It re-opened with a stage production of “Grand Hotel”. In 2012 the Freddie Mercury based musical “We Will Rock You” opened, which played for 12 years and closed on 31st May 2014. After that show closed, the Dominion Theatre underwent a complete redecoration and refurbishment. It re-opened in September 2014 with a revival of “Evita” which was followed in November 2014 by a stage production of Irving Berlin’s “White Christmas”.

Cinema use returned in late-February 2015 when Disney’s “Frozen - Sing-Along” was digitally presented from 18-28 February 2015, and on the evening of 26th February 2015 a Gala presentation of the film “The Backstreet Boys” followed by a live concert by the group which will be telecast to cinemas across Europe. The next cinema presentation was Hitchcock’s “Psycho” with ‘Live Orchestra’ on 4th March 2015. The musical “Bat Out of Hell” based on the music of Meatloaf was the next presentation which closed on 5th January 2019. A production of Chinese dances followed for a limited run.

The Hillsong London Church have been hiring the theatre on Sunday’s since 2005 and in March 2019 they seem to have taken over the theatre permanently, having erected a sign on the front of the theatre. The original raked stage was removed and a flat stage installed. The next stage presentation was a return of “White Christmas - the Musical” in November 2019 to January 2020. On 25th February 2020 the stage musical “Prince of Egypt” opened, but its run was cut short when the Covid-19 pandemic hit it March 2020, forcing all theatres and cinemas to close. The production returned to the reopened theatre on 1st July 2021 and bookings are being taken until 8th January 2022.

The above picture seems like the early 70s when the film was re-released yet the artwork is the original.

In New York the re-release used new artwork. So what year was the picture taken?

Were all these seats available for reserved seat movies? Seems like too many. Did they make a smaller theater within it like they did with the Rivoli and Warner and Loew’s State in NY? If not how did they get 3 years out of SOM and 4 out of SP? Huge audiences going again and again?

The Dominion Theatre was ‘downsized’ in 1958 when the 677-seat balcony(upper circle) was closed off and converted into offices. There was a loss of seats in the rear of the orchestra level when a new projection box was installed to screen Todd-AO and 70mm films. Other side seats with a bad view were also taken out and the seating capacity was reduced to 1,654. “The Sound of Music” became a BIG attraction, both for Londoners and tourists to the city. It also played for many months (sometimes years) in other large UK cities before going on general release. It played London suburban cinemas in 1969, four years after its Roadshow opening at the Dominion Theatre.

Only part of the upper circle was converted to a large room, the rear portion, with the wall containing portholes from the projection room, steppings, and even the rear row of seats, survives and could in theory be restored to make the Dominion the largest West End Theatre. Whether there is the demand, or whether people would put up with seats at the rear of the balcony (which are a very long way from the stage) is debateable!

I understand the screen at The Dominion back then at 48ft width was small by comparison to the other West End Cinemas such as The Astoria, Metropole and Empire, let alone The Odeon Marble Arch….

Hello! I work at the Dominion and I’m currently researching the history of the theatre as it is our 90th anniversary this year! If anyone has any anecdotes about working at/visiting the Dominion, or old photographs, I would love to see them! Please email .uk if you can help. Thanks! Liz

Occasional films after 1981 also included a limited engagement of “Gremlins” in 70mm from August 17 to 26, 1986 (I believe it was 1986). In the early eighties, I saw the “Chinese Acrobatic Show” there, the only time I went to the Dominion. I just added 2 pictures of the theatre front to the photos section, which I took around 1986-1988.

There is footage of the Royal premiere of Star! on youtube. As both Julie Andrews and Daniel Massey(at least we don’t see him but we see Noel Coward) are not there it doesn’t seem very exciting. And the Duke and Duchess of Kent? This makes it Royal? A wet firecracker. Like the film.