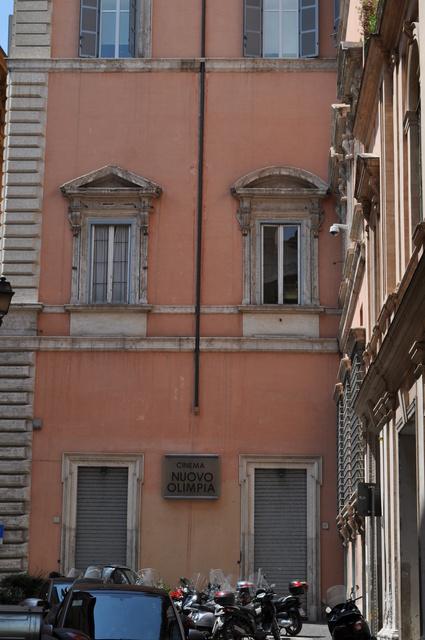 Located (almost hidden away) in a narrow street off the main shopping street via del Corso in the centre of Rome.

Originally this was the Teatro Olympia, a music hall theatre which was screening the ‘Reale Cinematografo Lumiere’ as part of the programme in April 1898. By 1940 it was a full time cinema.

This twin screen art house cinema was renovated in 1997, re-opening with Tom Cruise in “Eyes Wide Shut” and Wim Wender’s “Buena Vista Social Club”, and has seating for 275 and 90. It is one of the hosts of the Rome Independent Film Festival. Films are always screened in their original language versions. It is operated by the Circuito Cinema chain and is part of the Europa Cinemas Group.

A couple of photos and some text in Italian here:
http://www.cinebazar.it/riv1a000238.htm
A glass window in the auditorium ceiling:
View link

On May 18, 1940, as listed in Il Messaggero, the Olympia (as then spelled) was showing the French-made film “I prigionieri del sogno” (Duvivier’s 1939 “La Fin du Jour”) with Victor Francen and Michel Simon. French films were widely shown in Italy at this time, dubbed in Italian. Also on the bill was a second feature, the 1935 German-made “I due Re” (Der alte und der junge Konig) with Emil Jannings. German films, also dubbed in Italian, were widely shown. LUCE newsreels and shorts completed the program.