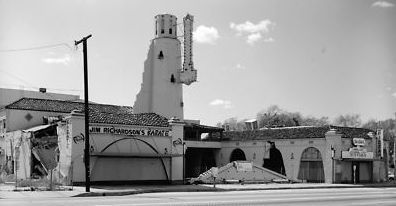 Opened on July 21, 1929 as the 1,200 seat McNees Theatre. It was was a pleasant, Atmospheric style neighborhood theatre with hacienda style sidewalls. It was damaged in the the 1987 Whittier earthquake and never reopened. It was demolished in May 1990.

I grew up in Whittier during the ‘60s and '70s. I did go to the Whittier Theater a number of times. Some of the movies that I remember seeing there were “Thoroughly Modern Millie” in 1967 and “Chitty Chitty Bang Bang” sometime after that. But what I remember MOST was that directly across the street from the theater on Hadley was a fast food place called Little Ol’ Taco Maker. My sister and I spent half of our lives at the fast food place. The food was really good. I think we went there starting in 1967 when I was in the 3rd grade all the way to High School around 1976. I remember right next to it was a car wash. I don’t know when they tore that restaurant down. Maybe after the earthquake??

I did also go to the Wardman (saw The Junglebook there) and the Whittwood but never the Roxy. It burned down before I ever had a chance to see a movie there. What memories.

I remember coming here with my mom and sisters,we lived in Pico Rivera,this was a big deal back then because there were not a lot of walk-ins.One movie that stuck in my head was Halloween and several scary movies were shown here as double features.It was so cool because it was one screen so it packed a large audience, no matter what movie.I remember always looking up above and the ceiling had stars that glittered and the left and rightsides looked like real stairways into spanish homes. It was such a popular theater that they had guys acting like club bouncers picking people to go in by there looks I suppose,they let me and my mom in I guess he thought she looked nice,lol.It was something we did every weekend.None of these modern theaters will never compare to the Whittier Theater and others like it. Nice memories here.

I saw the 1986 Disney movie “The Great Mouse Detective” at the Whittier. The interior atmosphere reminded me of the Aragon Ballroom in Chicago.

We moved to La Habra in December 1965. I remember going to the Whittier Theater to see the movie The Great Race in the spring of 1966. Coming from the midwest, I was awestruck by the Spanish architecture of the theater. Although I was only 13 at the time, I remember that theater as if it was yesterday – it made that much of an impression. I also went to many movies at the Whitwood Theater and at the Fashion Square Theater in La Habra. Fashion Square was unique for its time as it had four screens under one roof – a novel concept for that time. The Whittier Theater, however, was the most enjoyable theater I have ever attended.

The Whittier, in the 1940’s and 50’s was the “posh” theatre in town, and it was a real treat to go to a movie there instead of the Wardman or the Roxy: the night sky ceiling was glamorous and mystifying, and the courtyard felt like we were visiting one of the Missions instead of just being a few blocks from home. The building was on a bit of a hill and there were retail spaces around the corner on the right, as well as those on the street frontage: one of them was the beauty salon my grandma went to every Friday, and did that ever feel like a big deal to go with her :) The last time I got to attend the Whittier was when I was down for my grandpa’s funeral in 1982 and it still looked as wonderful to me then as it ever had, but that may have been nostalgia. I think my mom and I saw Indiana Jones that time, because I remember thinking that it was such a great place to be watching that particular movie. The next time I was back, the year after the earthquake, it was gone. Thank goodness the Wardman is still there.

The Whittier was just down the street from what was variously called a reform school, youth correctional facility, and “School for Boys.” Hugh Bruen, who owned the theatre, had special showings before regular hours so boys could be brought in to see movies. Quite a nice excursion, I imagine. The Whittier was the nicest of the three theaters (Wardman and Roxy were the others) and was known around SoCal for its hacienda motif and the stars on the ceiling.

In the early ‘50s I worked across Whittier Blvd from the Whittier Theater, at Miller’s Car Wash. Never into that theater though

In the ‘60s and '70s the Whittier was still beautiful. It was an “atmospheric” theater, meaning the interior of the auditorium was decorated like a stage setting of a Spanish colonial village with stairways, windows, and balconies, and the ceiling had tiny lights like stars, with wispy projected clouds slowly drifting by. The lighting created an exotic, dreamlike scene, sometimes more entertaining than the movie. There was also a stage behind the movie screen, but as far as I know there hadn’t been live performances for decades.

I apologize if this comment has appeared twice. There is no indication that clicking on “add comment” has been successful.

Whittier Amusements launched the McNees Theatre (no apostrophe in McNees, btw) on July 31, 1929 with Monte Williams and the entire cast of “From Headquarters” in attendance for gala opening. Sound came from an RCA Photophone system. During construction it was apparent that Warner Bros. Circuit would be taking over the venue. That transfer took place just four months later on November 26, 1929 when the theatre was renamed the Warner Bros. Whittier Theatre with Colleen Moore in “Footlights and Fools.”

The theatre was saved a reprieve from the wrecking ball at the 11th hour in January of 1987. However, an earthquake ended the hopes of saving the city’s last atmospheric theatre.