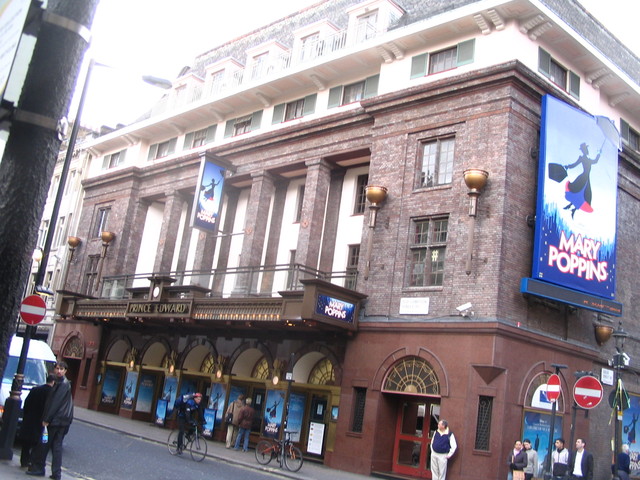 Located in London’s West End in the centre of the Soho district. Opened on April 3, 1930 as the Prince Edward Theatre with the musical comedy “Rio Rita”. Seating was provided for 1,800 in orchestra stalls, dress circle and balcony levels and stage boxes. Designed by noted cinema architect Edward A. Stone, with the exterior in red and yellow brick in the style of an Italian palace. The Art Deco style interior decorations were by Marc-Henri Levy and Gaston Laverdet. Although built as a live theatre, it was equipped for film presentations from the start, and screened its first film “Song O' My Heart” starring John McCormack in May 1930. During the early-1930’s it was often used during the day for film trade shows.

The Prince Edward Theatre was closed in 1935, when new owners took over and converted it into cabaret/restaurant known as the London Casino. The owners also operated the French Casino in New York and the Casino in Miami, Florida. Conversion entailed the construction of stairways from the orchestra stalls to the dress circle, and a semi-circular dance floor on the stage. The London Casino opened on 2nd April 1936 with “Folies Parisiennes”, and the shows were interchanged with New York and Miami. The French Casino in New York went bankrupt, but the London Casino was quite successful, and continued until 1940, when the German blitz on London caused it to close.

In July 1942, it was converted into the Queensbury All Services Club, used to entertain the troops. This continued until the end of World War II in 1945. The London Casino re-opened was re-converted back to a live theatre re-named Casino Theatre, opening on 14th October 1946 with “Pick-Up-Girl”, and was now under the control of Tom Arnold and Emile Littler. A revival of “The Dancing Years” was staged in March 1947, and this was followed by seasons of variety with international stars topping the bill, ballet seasons and annual pantomimes also features in the programming. In 1949 Robert Nesbitt’s “Latin Quarter” revue was staged and this ran for several years. In 1953 Cicely Courtneidge starred in the Vivian Ellis revue “Over the Moon”, which was followed by the holiday-camp musical “Wish You Were Here”.

In 1954, the London Casino was altered by architects Frank Baessler and TPH & E Braddock to house London’s first Cinerama cinema with a massive 64-foot-wide curved screen and three projection boxes built in the orchestra stalls. “This Is Cinerama” opened on 1st October 1954 at the Casino-Cinerama Theatre. This was followed by other films made in the Cinerama process “Cinerama Holiday”, “Seven Wonders of the World”, “Search for Paradise”, “South Seas Adventure, "The Best of Cinerama”, “How the West was Won” and “The Wonderful World of the Brothers Grim”. On 17th December 1965 a simultaneous European Premiere of “Battle of the Bulge” was held here and at the Theatre Royal Cinerama in Manchester. The Royal World Premiere of “Khartoum” was held on 9th June 1966. A World Premiere of “Custer of the West” was held on November 9th 1967. On 3rd February 1972 the re-release of “Zulu” starring Stanley Baker was presented in 70mm. On 18th October 1973 “This Is Cinerama” returned to theatre - “to be experienced by a new generation”. The Cinerama screen was eventually removed in 1974, with a more conventional screen replacing it until 8th April 1978 when it closed as the Casino Cinema with a double-bill of Diana Ross films “Lady Sings the Blues” and “Mahogany”.

On return to live shows in June 1978, it reverted back to its original name, Prince Edward Theatre, opening with the world premiere production of “Evita”. The musical ran for over eight successful years.

A further major alteration and renovations by the architectural firm RHWL in 1993, has modernized the auditorium and made it more attractive than at any time in its history.

It is now a major theatre in London’s West End and has played long runs of “Chess”, “Anything Goes”, “Crazy for You”, “Show Boat”, “West Side Story”, “Martin Guerre”, “Miss Saigon”. “Mama Mia”, “Aladdin”, “Mary Poppins” and “Jersey Boys”.

Ken, The Earl Carrol did show movies between shows in 1928-1930 including, ironically, premiering the film version of RIO RITA in 1929. It also may have showed films as the Casino in 1934.

Prior to this stunning renovation and rebuild it was a monstrous auditorium with little if any charm. Cameron has done an amzing job here and beteen Mary Poppins closing and Jersey Boys opens he is doing even more to make this an even better experience. He is doing tremendous work on all the West End houses he owns.

Some pre-renovation shots from 1991, I am not sure I would call it monstrous, but it is certainly vastly improved now!!

The Cinerama screen didn’t look “at home” in this theatre! It somehow looked wider than the proscenium!

I would say that the Cinerama screen was perfectly suited to this theatre. I saw virtually all of the Cinerama movies shown here and it was an incredible experience. Even the pseudo Cinerama films looked good on this screen. Just the redesigned MGM logo for 2001 is etched in my mind from seeing it at The Casino. I have seen the film many times since and it never looks as good as it did on that Cinerama screen.

Photos of the auditorium in Cinerama guise and a (somewhat crudely drawn!) plan (with the three projector locations marked) can be seen, as well as a plan for the change to a single projector setup/replacement screen in 1974. Lists of three strip and single strip programming are also included.

Whatever the merits of Cinerama by today’s standards, the 1954 alterations look disastrous—aesthetically and yielding a technically substandard auditorium (in terms of acoustics, seating locations relative to the screen, etc.) Fascinating history, though…!