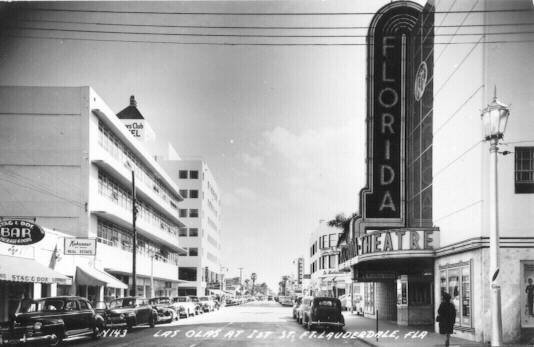 The Florida Theatre was opened September 12, 1939 with “These Glamour Girls” starring Lew Ayers and Lana Turner. It was operated by Paramount Pictures Inc. through their subsidiary E.J. Sparkes. It closed in 1965.

The February 22, 1941, issue of Boxoffice published a photo of the new Florida Theatre at Fort Lauderdale. The theater was designed by Jacksonville architect Roy A. Benjamin.

I’m looking through that issue of Boxoffice online, and am not finding the picture. Did I miss it? In the meantime, I’ll check a few other issues around that one.

I believe the theater had begun to show movies prior to 1941. There was a Pete Smith Specialty shot at Clyde Beatty’s Jungle Zoo north of town where Gateway Shopping Center is now located. The short was said to have premiered at the Florida in June of 1940. Can anyone add to or correct this info? Thanks.

Dave Price is probably right. Work on E. J. Sparks' new theater on Las Olas Boulevard was “well under way” according to an item in the January 13, 1939, issue of The Film Daily. The Warnor and Colony were the downtown Fort Lauderdale theaters that opened in 1941. The Florida must have opened fairly early in 1939.

Conceptualized as the Broward Theatre (architectural sketching by Roy A. Benjamin in photos), the theatre launched August 1, 1939.

This opened on September 12th, 1939. Grand opening ad in the photo section. Article and picture: