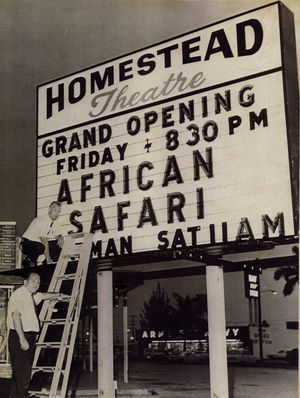 Opened as the Palms Theatre on October 25, 1955. In 1969 it was renamed Homestead Theatre, reopening with “African Safari” (aka “Rivers of Fire and Ice”). It operated as a sub-run theatres until it closed in 1983.

This was owned by Holiday Theatres in the seventies.

This may have opened as the Palms theatre in 1963.

Across the street from the Seminole Theater on Krome Avenue in downtown Homestead is the Homestead Historic Town Hall Museum. As of October 2014 when I last visited there were maybe 3-4 historic photos on display of some of the cinemas listed here on Cinema Treasures as formerly existing in Homestead. One may be of the Homestead Theater when it was called the Palms.

Walk to the back of the museum where the former jail cells are located, go left and look on the walls. I had noticed the same photos during visits in preceding years so I assume they may be on permanent display. The museum staff may be able to help you find them and other photos they may have.

Here is a link to the Museum’s Trip Advisor page:

I believe I was told or read somewhere that the Homestead Theater building was damaged enough by Hurricane Andrew that it was demolished shortly afterwards, though the theater apparently had already closed well before the storm.

Elmorovivo: Wow, where did you find the picture of the marquee?

This photo also appears on p. 147 of the book “A Journey Through Time: A Pictorial History of South Dade” by Paul S. George, with the caption:

“Alex Weinstock (at the bottom of the ladder) and Frank Kelleher, Homestead Theatre executives, prepare the marquee of the new facility for its grand opening. 1955. Courtesy South Dade News-Leader”

The Miami-Dade Public Library system has 22 copies of this book.

As I said in my previous comment, I may have seen a photo of the Palms theater, which this may have been at some point, in the Homestead Historic Town Hall Museum across from the Seminole Theater.

The Palms/Homestead has a paragraph in Bob Jensen’s article in the South Dade News Leader from December 11th, 2015:

He says “In the 1960s Frankie Avalon and Annette Funicello made a visit to the Palms while they were in Miami-Fort Lauderdale promoting their ‘Beach Blanket Bingo’ movie.”

I believe the marquee sign in the photo may have been next to the end of the building that is now a real estate service office and Tooth Place Dental Clinic, at the spot where now stands a lone tree:

The skinny poles holding up the roof over the sidewalk (one pole, then two poles next to each other) behind the marquee are visible in Google Street View in 2015 as being in front of the real estate services office, and the Army Navy store in the photo’s background might now be the Mexico Market across the street. 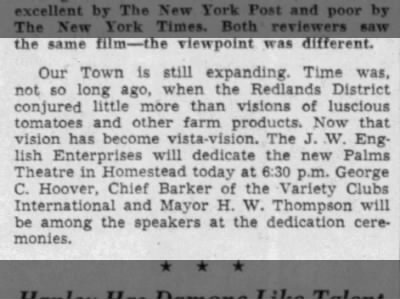